Driven by a pronounced change in marketing and promotion strategies as well as price declines and an increasing availability of content, worldwide shipments of 3-D TVs will catapult by a spectacular 463 percent to reach 23.4 million units in 2011, according to IHS iSuppli (NYSE: IHS) research.

The 3-D TV projections in 2011 represent startling growth for the much-publicized technology, with shipments expanding by a factor of 5.5 from 4.2 million units last year. Another year of triple-digit growth is expected in 2012, when shipments will soar by 132 percent to 54.2 million units. Global shipments will breach the 100-million-unit mark by 2014 and then hit 159.2 million in 2015. 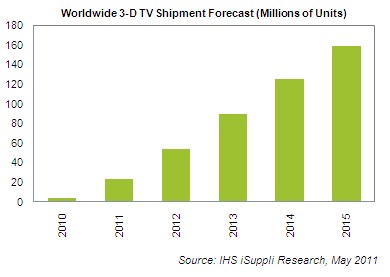 “In a major recalibration effort, television brands are changing strategies this year following lukewarm response to 3-D in 2010 when consumers balked at the high price of sets and the lack of 3-D content,” said Riddhi Patel, director for television systems and retail services at IHS. “In 2011, however, brands are marketing 3-D not as a must-have technology but as a desirable feature, similar to the approach they have taken with Internet connectivity.”

Brands believe this approach to promoting 3-D allows consumers to decide whether they wish to use the feature when they are ready, while convincing them that their newly purchased television is future-proofed, Patel noted. This gives consumers the appearance of having the choice to use a feature already present in a purchase that they made, instead of forcing them to buy a technology for which they might be unprepared, according to the television brands.

To further motivate consumers to buy 3-D TVs, brands are slashing prices. Prices for 3-D TVs fell 9 percent during March 2011 compared to February, according to the US TV Price and Specifications Tracker, a monthly IHS iSuppli service that tracks U.S. TV prices. Within the next year, prices will shift again, in accordance with the feature mix dictated by public preferences at the moment–a process expected to democratize 3-D adoption among consumers in all income brackets.

Broadcasting of 3-D also will enjoy an uptake, helping to dispel the public perception of a serious lack in currently available 3-D content for consumption. From the launch of 3-D TV services in June 2010 for the United States, and then in October the same year for the United Kingdom, more than 80 live sources of 3-D broadcast or pay-TV content had been delivered by the end of 2010. More programming will be available this year, topped by sports-related events and then followed by primetime entertainment, films and documentaries.

Options also are arising for the 3-D glasses that are required for 3-D TV viewing. While the current active shutter glasses provide better picture quality, an alternative known as passive Film Patterned Retarder (FPR) not only will expand availability in sizes as small as 32-inches, but also will reduce the overall cost of ownership, with the glasses being more user friendly as well. By 2015, passive 3-D shipments will surpass those of active 3-D, IHS expects.

The Appeal of 3-D TV Continues

Liquid crystal display (LCD) will remain the dominant technology for the 3-D TV market, accounting for 83 percent of 3-D TVs sold in 2011. In comparison, plasma is a much smaller player. However, 3-D penetration in plasma is higher, as the highly touted feature is one that plasma manufacturers hope will help slow the decline of the plasma market.

The 3-D TV share of the global flat-panel market will continue to rise in the years to come, jumping to 11 percent in 2011 from 2 percent last year, and then doubling next year to 22 percent. By 2015, 3-D TVs will account for 52 percent of flat-panel shipments.