Worldwide Spending on the Internet of Things Forecast to Reach Nearly $1.4 Trillion in 2021, According to New IDC Spending Guide

FRAMINGHAM, Mass. — A new update to the International Data Corporation (IDC) Worldwide Semiannual Internet of Things Spending Guide forecasts worldwide spending on the Internet of Things (IoT) to grow 16.7% year over year in 2017, reaching just over $800 billion. By 2021, global IoT spending is expected to total nearly $1.4 trillion as organizations continue to invest in the hardware, software, services, and connectivity that enable the IoT.

“The discussion about IoT has shifted away from the number of devices connected,” said Carrie MacGillivray, vice president, Internet of Things and Mobility at IDC. “The true value of IoT is being realized when the software and services come together to enable the capture, interpretation, and action on data produced by IoT endpoints. With our Worldwide IoT Spending Guide, IDC provides insight into key use cases where investment is being made to achieve the business value and transformation promised by the Internet of Things.” 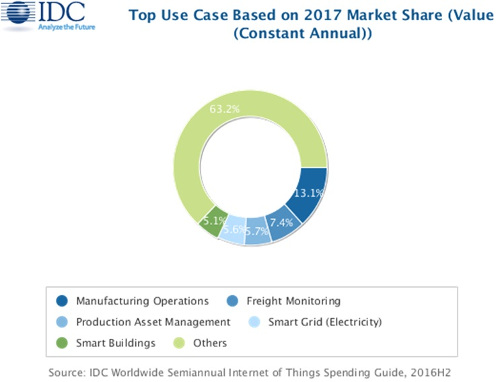 The IoT use cases that are expected to attract the largest investments in 2017 include manufacturing operations ($105 billion), freight monitoring ($50 billion), and production asset management ($45 billion). Smart grid technologies for electricity, gas and water and smart building technologies are also forecast to see significant investments this year ($56 billion and $40 billion, respectively). While these use cases will remain the largest areas of IoT spending in 2021, smart home technologies are forecast to experience strong growth (19.8% CAGR) over the five-year forecast. The use cases that will see the fastest spending growth are airport facilities automation (33.4% CAGR), electric vehicle charging (21.1% CAGR), and in-store contextual marketing (20.2% CAGR).

The industries making the largest IoT investments in 2017 are Manufacturing ($183 billion), Transportation ($85 billion), and Utilities ($66 billion). Cross-Industry IoT investments, which represent use cases common to all industries, such as connected vehicles and smart buildings, will be $86 billion in 2017 and rank among the top segments throughout the five-year forecast. Consumer IoT purchases will be the fourth largest market segment in 2017 at $62 billion, but will grow to become the third largest segment in 2021. Meanwhile, The industries that will see the fastest spending growth are Insurance (20.2% CAGR), Consumer (19.4%), and Cross-Industry (17.6%).

From a technology perspective, hardware will be the largest spending category until the last year of the forecast when it will be overtaken by the faster growing services category. Hardware spending will be dominated by modules and sensors that connect end points to networks, while software spending will be similarly dominated by applications software. Services spending will be about evenly split between ongoing and content services and IT and installation services. The fastest growing areas of technology spending are in the software category, where horizontal software and analytics software will have five-year CAGRs of 29.0% and 20.5%, respectively. Security hardware and software will also see increased investment, growing at 15.1% and 16.6% CAGRs, respectively.

“As enterprises are adopting to new and innovative services provided by different vendors a lot of new threats are introduced, so it’s very important to upgrade existing security systems to ensure that an optimal business outcome can be reached and ROI can be justified,” said Ashutosh Bisht, research manager for IT Spending across APeJ.

Asia/Pacific (excluding Japan)(APeJ) will be the IoT investment leader throughout the forecast with spending expected to reach $455 billion in 2021. The second and third largest regions will be the United States ($421 billion in 2021) and Western Europe ($274 billion). Manufacturing will be the leading industry for IoT investments in all three regions, followed by Utilities and Transportation in APeJ and Western Europe, and Transportation and Consumer in the United States. Cross-Industry IoT spending will be among the leading categories in all three regions as well. The regions that will experience the fastest growth in IoT spending are Latin America (21.7% CAGR), the Middle East and Africa (21.6% CAGR), and Central and Eastern Europe (21.2% CAGR).

The Worldwide Semiannual Internet of Things Spending Guide forecasts IoT spending for 12 technologies and 54 use cases across 20 vertical industries in eight regions and 52 countries. Unlike any other research in the industry, the comprehensive spending guide was designed to help vendors clearly understand the industry-specific opportunity for IoT technologies today.