LONDON (March 31, 2020) — Omdia has slashed its 2020 global television shipment outlook by nearly 10 percentage points, with the market now expected to undergo a sharp downturn due to coronavirus mitigation measures initiated by governments worldwide. 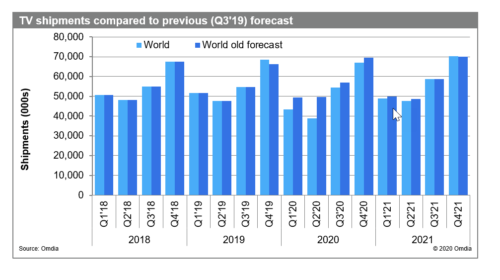 Global television shipments will fall by 8.7 percent in 2020, declining to 203.5 million units, down from 222.9 million in 2019, as reported by the Omdia TV Sets Market Tracker. Omdia previously forecast shipments would rise by 1.1 percent to reach 225.4 million units for the year. This represents a 9.8 percent downswing in the shipment forecast for the year.

“The global television market is experiencing a shocking reversal of fortune,” said Paul Gray, research director, consumer devices, for Omdia. “Just one month ago, things were looking up for TV sales, with 2019 having ended on a hopeful note and all indications pointing to mild television shipment growth in 2020. However, that hope has completely evaporated during the past month as concerns about supply interruptions have been eclipsed by rising industry anxiety over a coronavirus-driven demand crash.”

The plunge in demand is the direct result of government mandates in countries all over the world to restrict individual movement. These restrictions represent a major disruption to consumers’ normal lives and customary shopping habits. At the same time, the suspension of the normal sport calendar—in particular the postponement of the 2020 UEFA European Football Championship and the Tokyo 2020 Summer Olympic Games—has put much of the promotional activity in the television business on hold.

“At a regional level, annual declines in television shipments of more than 10 percent are not that unusual,” Gray said. “During the past 12 years there have been a dozen such regional events. What’s unprecedented is these declines now are happening everywhere simultaneously due to global government action. This phenomenon has never been seen in the history of the TV market.”

Omdia now forecasts the majority of the demand drop will occur in the second quarter. However, with TV brands facing order cancellations from retailers starting in the beginning of March, shipments are set to fall by 16 percent compared to the second quarter of 2019.

While China will start to recover in the second quarter, shipments in Europe and North America are expected to fall by more than 40 percent. Other regions will decline by a smaller margin as they have advance warning to put effective measures in place—avoiding dramatic shutdowns.

Silver linings in the TV outlook

“Developed markets shrugged off the 2008-2009 recession and television sales still grew solidly,” Gray said. “This is largely because television remains good value entertainment—far cheaper than going out. However, it’s certainly true that emerging countries’ TV markets are tied to the broader economy. We have already seen some anecdotal evidence that some consumers purchased TV sets before undergoing isolation measures. Omdia also expects that a flurry of rescheduled sports events in 2021 will boost television sales.”

Omdia plans to regularly update its TV shipment forecast, responding to events as they unfold.