Facebook Leads the VR Headset Market in Q1 2021 But There’s Plenty of Room for Others, According to IDC

NEEDHAM, Mass. — Global shipments of virtual reality (VR) headsets grew 52.4% year over year in the first quarter of 2021 (1Q21), according to new data from the International Data Corporation (IDC) Worldwide Quarterly Augmented and Virtual Reality Headset Tracker. Standalone headsets, which feature an all-encompassing design such as the Oculus Quest 2 or the HTC Vive Focus, accounted for the vast majority of shipments, capturing 82.7% share during the quarter, up from 50.5% in the first quarter of 2020. The growing popularity of gaming, as well as fitness, has helped spread consumer awareness of VR while companies like Facebook have made the tech more accessible. 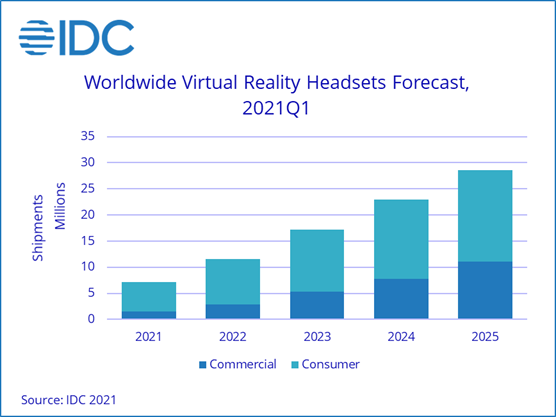 “Oculus has singlehandedly driven growth in the market as the company managed to capture almost two thirds share of global VR headset shipments during the quarter,” said Jitesh Ubrani, research manager for IDC’s Mobile and Consumer Device Trackers. “While the company currently dominates the consumer segment it faces competition in the commercial segment and its lack of presence in China leaves an opportunity for local brands as well as brands that can cater to businesses.”

In addition to Oculus, Chinese companies DPVR and Pico also performed well during the quarter, finishing as the second and third ranked companies and growing 108.6% and 44.7% year over year respectively. Each of the companies already has a strong foothold in China and are working to grow their international presence by catering to the commercial segment. Moreover, the short-term outlook for these companies, Pico in particular, bodes well as they address the need for lower-cost headsets with 3 Degrees of Freedom (DoF) while also transitioning a portion of their userbase to more immersive 6 DoF headsets and content. HTC and Sony rounded out the top 5 VR headset companies.

Looking ahead, IDC forecasts VR headset shipments to grow 28.9% year over year in 2021. However, the forecast reflects supply-side constraints as some vendors will struggle with component shortages during the year. The long-term outlook remains quite strong as global shipments are forecast to grow to 28.6 million in 2025 with a five-year compound annual growth rate (CAGR) of 41.4%.

“The commercial use cases for virtual reality continue to proliferate,” said Tom Mainelli, group vice president, Device & Consumer Research at IDC. “As companies continue to plan for a future that encompasses a combination of both in-person and remote work, we see VR playing an increasingly important role in driving next-generation collaboration, training, and digital events.”