FOSTER CITY, Calif. — Conviva, the global streaming analytics platform, released today the results of its quarterly State of Streaming Report, which shows continued growth in the global streaming market, including gains of (14%) in the second quarter of 2022 as compared to Q2 2021. Asia and Latin America saw the most growth — 90% and 70%, respectively — while North America, the most mature streaming market in the world, also grew 5% year over year. 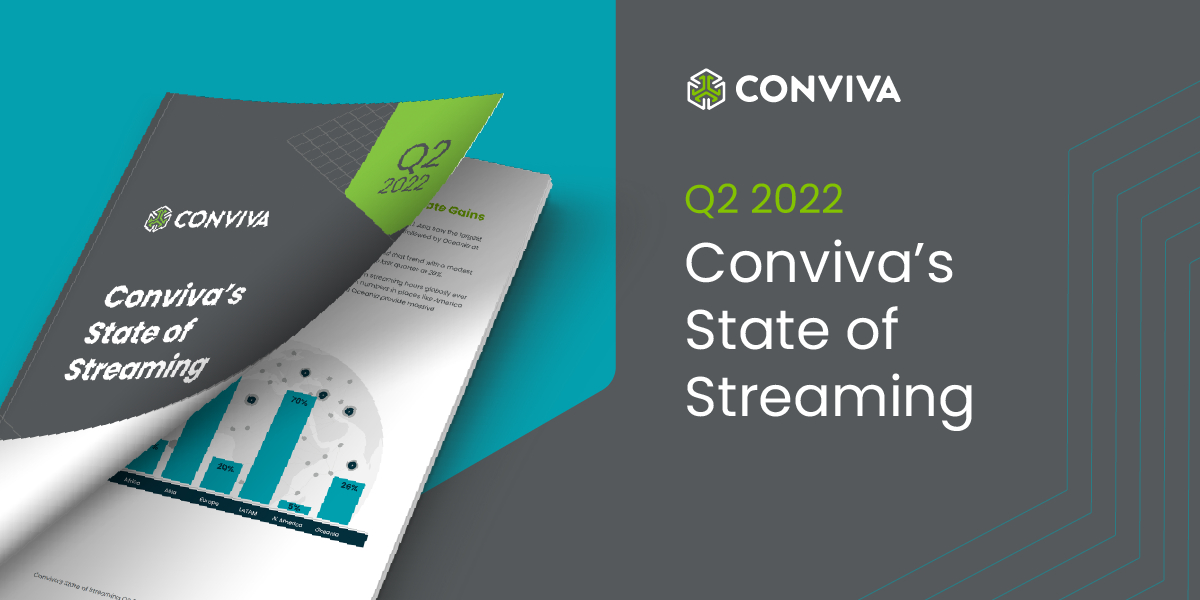 As the global streaming industry matures, streaming success is getting more complicated. Device fragmentation is growing, and viewers’ quality expectations continue rising in concert with an ad-supported streaming world. Streaming publishers are challenged to deliver a consistent and positive experience. Whether in Africa using an Android phone or in Texas on a Smart TV – viewers expect a quality picture, instant access to content and zero glitches.

“The race is on to see which publishers will meet these expectations, including providing the best experience when it’s most important,” said Keith Zubchevich, President and CEO, Conviva. “Those who do will quickly eclipse the competition. Most importantly, those who make it a priority to obtain real-time actionable insights about their customers’ (real-world experiences) will undoubtedly separate the leaders from the pack,” added Zubchevich.

Conviva found bitrate rose globally in Q2 2022 across all screen types and devices, but often at the expense of other quality metrics. For example, Smart TVs saw the largest increase in bitrate of all screen types, up 15.1% year over year. However, to provide this more high-definition experience, Smart TVs saw noticeable increases in video start failures, video start time and buffering. Conversely, PlayStation and Roku were the only big screen devices to both decrease video start times (down 10.7% and 12% respectively) and increase bitrate (up 4.6% and 12.9% respectively).

Roku continued to hold the top spot among big screen devices (big screens include connected TVs, Smart TVs and gaming consoles), holding nearly steady at 30.5% of viewing time, down less than one percent as compared to Q2 2021 with Amazon Fire TV coming in second with 16% of big screen viewing time. Samsung TV (13.7%), Android TV (7.8%) and LG TV (7.3%) rounded out the top five devices for big screen viewing time. Chromecast, Xbox and PlayStation all saw a decrease in share as compared to the previous year.

To date, the iPhone has been the primary device for mobile streaming, especially in North America. In Q2 2022 the gap closed, with iPhone and Android phones capturing nearly identical global market share, 35.8% vs 33.2% respectively. In addition, Android phones outpaced the iPhone by 10% in YoY growth in streaming viewing hours. In Apple’s favor is its quality — as the iPhone currently beats Android phones in every quality category. As streaming publishers expand into newer, less mature streaming markets outside of North America, optimizing the streaming experience for the android mobile device market will be of increasing importance.

Year-over-year comparisons were normalized at the customer level for accurate representations of industry growth.