Products Available Will Range from Basic Connectivity to Smart TV, Influenced by Regional Differences in Broadcast and Internet Access

SANTA CLARA, Calif. — Attendees at the Consumer Electronics Show in January saw how pivotal internet services have suddenly become to TV products. Overall, nearly 20% of all TVs shipped in 2010 featured connected TV capabilities. According to the DisplaySearch Q1’11 Quarterly TV Design and Features Report, the connected TV category is forecast to grow to over 123 million shipments in 2014 (at a 30% compound annual growth rate).

Emerging markets will also play a major role in this growth, with Eastern Europe forecast to grow from 2.5 million connected TVs shipped in 2010 to over 10 million in 2014. In addition, DisplaySearch findings indicate that 33% of flat panel TVs sold in China in 2013 will have internet capability. 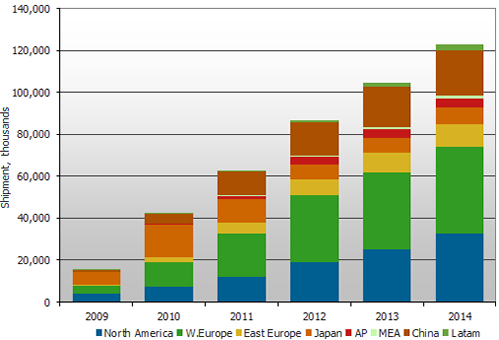 “The connected TV market is developing beyond mature regions like Western Europe and Japan,” said Paul Gray, Director of TV Electronics. “With some emerging countries having excellent broadband infrastructure, the adoption of connected TV capabilities is a natural next step in TV feature innovation.”

In developed regions, connected TV is a second wave following on the heels of digital broadcasting. In China, however, the adoption of connectivity is occurring in advance of digital terrestrial television (DTT) adoption. As a result, TVs shipped into this region can decode video from the internet, but not from terrestrial broadcast. DisplaySearch foresees a surge in China driven by decoder chip costs reaching a tipping point, as the cost for such capability is now low.

DisplaySearch forecasts that the connected TV market will become fragmented and increase in complexity. Basic connected sets carrying enhanced broadcast services such as Hbb.TV or basic video on demand (such as Netflix, Maxdome, Acetrax or VUDU) will appeal to consumers who expect TV to remain a passive experience. For more adventurous consumers, the smart TV segment will enjoy configurable apps, sophisticated search and navigation engines, and advanced user interfaces. DisplaySearch defines a smart TV as a TV that can retrieve content from the internet without the restrictions of a portal, has intelligent search and recommendations, is upgradeable by its owner, and is able to network seamlessly with other devices in the home.

Gray added, “Smart TVs are adding to what is already a fast-moving and fiercely competitive battleground, with competition appearing in all directions, including mobile PC devices such as tablets and increasingly powerful set top boxes with services accessible anytime, anywhere.”

The Quarterly TV Design and Features Report compares the connected TV strategies of some of the major brands. For example, Panasonic is opting to locate intelligence in the cloud, while Samsung is building the capability into the device. Other new capabilities reviewed in the report include the RVU standard that allows connected TVs and set-top boxes to share pay TV content, and low-power sets that can operate with no power cord using only an Ethernet cable.

The DisplaySearch Quarterly TV Design and Features Report is a quarterly update of the issues and rapid shifts in feature development in TV sets. The 250+ page report examines and forecasts video processor and signal processing IC market development including 120/100 and 200/240 Hz frame rates, as well as market shares for major IC vendors. In addition, the report also features forecasting for MPEG-4 decoding and the digital broadcast environment around the world, including a forecast for DVB-T2; TV connectivity, such as wired and wireless networked TVs; LED backlighting; 3D-capability and implementation; remote controls and chassis design; and power consumption.