Consumers in Emerging Markets, Such as China and Brazil, Will Drive TV Demand

SANTA CLARA, Calif. — According to the recently released NPD DisplaySearch Global TV Replacement Study, consumers in emerging markets–such as Russia, Turkey, China, India, Indonesia, Brazil, and Mexico–are going to drive the next round of demand, with more than 40% planning to purchase a TV in the next 12 months. Declining prices, increased brand promotions, and an on-going replacement cycle are the main reasons for increasing demand in these countries.

Drivers for planned purchases differed for emerging markets versus mature markets, such as the United States, Japan, Germany, France, Italy and the UK.

“The desire to have a flat panel TV, good picture quality, and more affordable prices are cited as the top three reasons for planned purchases in mature markets,” noted Riddhi Patel, Research Director, Consumer Insights for NPD DisplaySearch. “For emerging markets, the primary reasons driving planned purchases are picture quality, sound quality, and a strong warranty/service plan. These results show the influence of financial status and living standards in consumer mindset when it comes to TV purchases.” 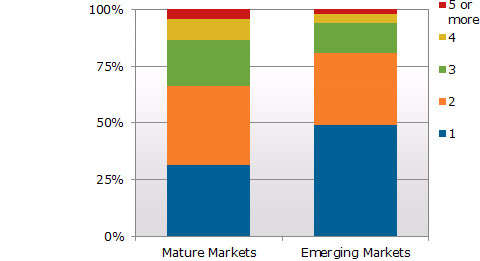 More TV/Video Content Consumed on Other Devices in Emerging Markets

The NPD DisplaySearch Global TV Replacement Study also surveyed households about the additional devices used to view TV/video content, finding that more households in emerging markets use devices other than a TV, including mobile devices such as tablets, smart phones, and MP3 players.

“Because many households in emerging markets have only one TV but multiple generations living under one roof, mobile device penetration in these markets is high, which enables consumers to access content in other ways,” added Patel. 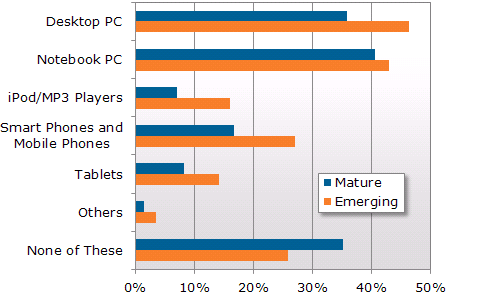