Global TV Demand Expected to be Flat in 2013

SANTA CLARA, Calif. — With consumers all over the world facing continued economic uncertainty, global TV demand is expected to be flat in 2013, after shipments of all TV types declined by more than 4% in 2012, to 237M, according to the latest results from the NPD DisplaySearch Quarterly Advanced Global TV Shipment and Forecast Report.

“Worldwide demand for TVs continues to face pressure from external factors, such as slowing economic growth, high unemployment rates, and the rising household penetration of flat panel TVs,” noted Paul Gagnon, Director, North American TV Research at NPD DisplaySearch. “At the same time, internal factors, such as slower cost reductions and a greater focus on profits at the expense of volume, are leading to a lower level of retail price erosion, which is also impacting demand.”

Despite the slower overall growth rate of shipments, the industry continues to show progress in the advancement of larger screen sizes and advanced display technologies like LED backlights and 3D. Shipments of 50″ and larger screen sizes are expected to rise 13% in 2013, compared with just 1% growth of 40-49″ and a 2% decline in shipments of 40″ and smaller sizes. Demand for smaller sizes will start to compete with TV viewing on the larger and higher resolution displays found in mobile devices such as tablet PCs and smartphones. At the same time, a large group of flat panel TV adopters will be upgrading from 32″ LCD TVs to 40″ and larger sizes.

In the long term, as the TV replacement cycle shifts from the flat panel replacement of CRTs, to flat panel upgrades, here is potential for renewed growth, especially as new features become more affordable. LCD TV shipments will continue growing throughout the forecast while demand for CRT and plasma TVs declines. 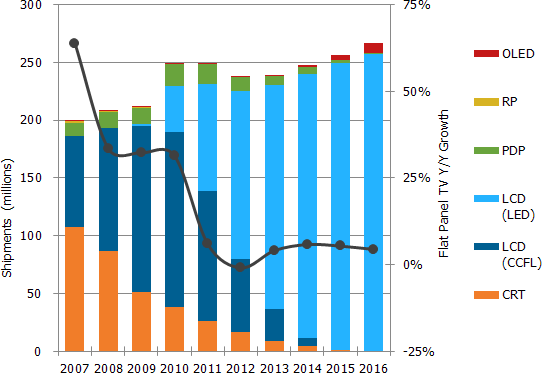 Gagnon added, “At the recent IFA Berlin tradeshow, the competition between 4K x 2K LCD TVs and OLED TVs was a hot topic. While the likelihood of a 2012 launch of OLED TVs seemed to evaporate when mass production was delayed until at least 2013, many companies demonstrated 4K x 2K resolution LCD TVs that were already beginning production.”

The NPD DisplaySearch Q3’12 Quarterly Advanced Global TV Shipment and Forecast Report, available now, includes panel and TV shipments by region and by size for nearly 60 brands, and also includes rolling 16-quarter forecasts, TV cost/price forecasts and design wins. This report is delivered in PowerPoint and includes Excel based data and tables. If you need further information or assistance please contact us at +1.408.418.1900 or [email protected] or at the local DisplaySearch offices in China, Japan, Korea, Taiwan and the United Kingdom.