Overall TV Market Continues to Slow Growth in the Near Term

SANTA CLARA, Calif. — With the annual Consumer Electronics Show just around the corner, speculation about what TV technologies will be highlighted by manufacturers has been growing. In recent years, highlights have included 3D, Smart TV, and OLED, as TV makers promoted technologies to excite consumer interest. This year it’s 4Kx2K.

According to the latest TV market forecast published in the NPD DisplaySearch Quarterly Advanced Global TV Shipment and Forecast Report, 4K LCD TV shipments are projected to exceed OLED TV shipments through 2015. This is a result both of the delay in commercialization by OLED TV makers, as well as increased promotion of 4K LCD TVs by several brands. In addition, many Chinese TV brands are currently in the process of launching 4K LCD TVs in the domestic China market. OLED TVs are still expected to launch in 2013, but volumes are expected to be low and prices expected to be very high. 4Kx2K resolution is not exclusive to LCD TV and 4K OLED TVs are also expected to be introduced at some point in premium TV segments.

“The global TV market–and North America in particular–are experiencing either slow or negative growth in 2012, and brands are eager to demonstrate new technologies that might create a spike in demand,” noted Paul Gagnon, Director for Global TV Research at NPD DisplaySearch. Gagnon added, “OLED TV was prominently featured during the previous two CES shows as the next-generation TV display technology, but the lack of market launch so far has caused several set makers to start emphasizing 4Kx2K resolution TVs for premium market segments.”

Overall TV demand is expected to fall in 2012. Consumers worldwide are grappling with tough economic conditions, and TV prices are falling at only marginal rates. The LCD TV forecast for 2012 was reduced slightly to 205 million, slightly lower than in 2011. In addition, plasma TV shipments are projected to fall 24% Y/Y to 13 million. Looking forward, the market is expected to be flat in 2013 on persistent economic uncertainty before entering a period of gradual growth as conditions improve and as price declines in the TV market accelerate. 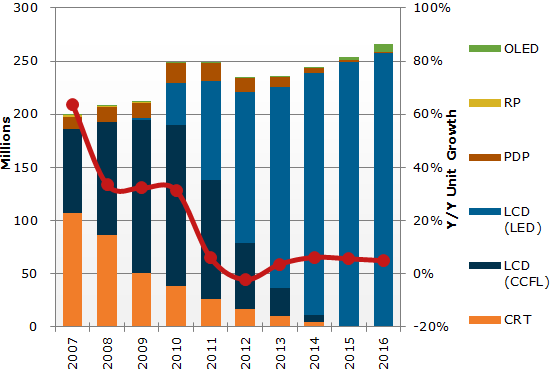 The NPD DisplaySearch Q4’12 Quarterly Advanced Global TV Shipment and Forecast Report, available now, includes panel and TV shipments by region and by size for nearly 60 brands, and also includes rolling 16-quarter forecasts, TV cost/price forecasts and design wins. This report is delivered in PowerPoint and includes Excel based data and tables. If you need further information or assistance please contact us at +1.408.418.1900 or [email protected] or at the local DisplaySearch offices in China, Japan, Korea, Taiwan and the United Kingdom.