Multimedia Home Gateway Shipments Set to Surge a Hundredfold by 2015

Global shipments of multimedia home gateways (MHGs) are expected to rise by a factor of more than 100 from 2011 to 2015 as pay-TV operators seek to unify the delivery of different forms of video content to all types of devices in homes, including media tablets and smartphones.

Global MHG shipments are set to climb to 9.6 million units in 2015 and 2016, up from just 90,000 in 2011, according to an IHS Screen Digest report entitled “Multimedia Home Gateways: The Future of the Digital Home,” from the TV Technology Intelligence service at information and analytics provider IHS (NYSE: IHS). 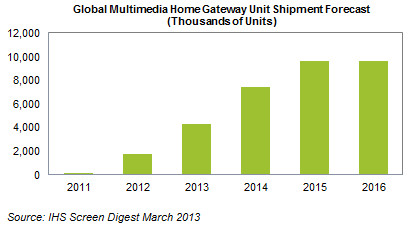 “A decade ago, set-top boxes (STBs) served as the bridge from analog to digital broadcasting,” said Daniel Simmons, senior principal analyst at IHS and lead author of the report. “Today, MHGs are playing a similar role, acting as the bridge between broadcast and Internet Protocol (IP) video distribution. With MHGs, cable and satellite operators can utilize the efficiency of broadcast television to provide advanced services and content to all kinds of IP-connectable devices, including today’s increasingly popular mobile devices.”

Operators cannot effectively manage delivery over a third-party network. Because of this, they struggle to offer the same content, services and quality of services to IP-connectable devices as they can to television sets via their own STBs. This dual-network approach creates an inconsistent and frustrating experience for consumers and increases expenditures for operators as they are required to maintain an additional OTT delivery platform.

“MHGs allow operators to consolidate content delivery around their managed networks regardless of the viewing device,” said Anna Maxbauer, senior analyst at IHS and one of the report’s coauthors. “They can create a pay-TV experience that is identical and consistent across every screen in the home, where the majority of content is consumed. This improves the consumer experience and reduces OTT delivery costs,”

The increasing integration of Wi-Fi home networking within MHGs underscores the commitment of operators to support multiscreen video in the home. Wi-Fi penetration in MHGs is forecast to grow to 73 percent of units shipped by 2016, up from just 18 percent in 2012.

Moreover, Wi-Fi is only one of several new features being added to MHGs.

“The MHG is a server platform able to host a range of in-home services,” said Stephen Froehlich, principal analyst for IHS, and another coauthor of the report. “Beyond Wi-Fi, some of the major services include gigabit broadband, transcoding, large applications, graphics processors, content storage and edge caching. The hardware and software requirements for each MHG are quite different from one operator to the next, making MHGs a profitable point-of-value creation for STB manufacturers and their suppliers for the foreseeable future.”

Simmons added, “The capabilities of the MHG, and in particular its requirement to establish a ubiquitous whole home network, position pay-TV operators to offer a range on additional services that could elevate them above being simple purveyors of media access. Home automation and security, as well as smart energy and e-health services, all could be supported by the MHG and offer additional revenue opportunities.”

About “Multimedia Home Gateways: The Future of the Digital Home“

This report is the first to combine the industry-leading expertise of Screen Digest and IMS Research, both of which are now part of IHS. Both organizations have been covering the MHG market since its inception, and collaboration among the three leading analysts in the field has resulted in an unparalleled depth of coverage. In addition to a complete discussion of the markets addressed by MHGs along with the technology that MHGs are using, the report provides case studies of each of the 11 currently announced MHG deployments, including forecasts for each through 2016.