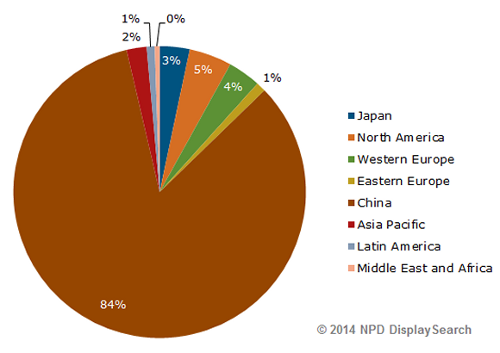 “4K TV remains on an aggressive growth trajectory, but the expectations of the supply chain are extremely high, relative to observed market performance and current retail pricing levels so far,” said Paul Gagnon, director of global TV research for NPD DisplaySearch. “With panel price premiums falling rapidly, and a growing chorus of non-Chinese brands pushing 4K, it is possible for retail set prices to fall quickly to improve volume, but at the expense of profits.”

The Chinese market and brands continue to be a rapidly growing part of unit shipments of LCD TVs overall and the driving force for 4K TVs in particular. The majority of 4K TV volume in China was primarily concentrated in the following sizes: 39 inches, 50 inches, and 55 inches. Outside of China, 4K TV sizes were heavily focused on the 55-inch and 65-inch models sold by Sony, Samsung, and other global brands.

“4K is a very important strategy for most brands, but particularly those targeting the high-end TV market,” Gagnon noted. “In fact, while Chinese brand Skyworth held the top overall 4K TV shipment share worldwide in 2013, Sony maintained the top shipment share of 4K TVs outside of China, which is a position they have held since the second quarter of 2013, but one which will be challenged significantly this year by low-cost competitors from China and elsewhere.”

The trend toward 4K is an important one for the TV industry, as global shipments of TVs fell 3 percent in 2013 and even high-growth categories like LCD TV only rose 2 percent after a 1 percent decline in 2012. According to Gagnon, “for TV manufacturers, the focus on profitable and growing market segments, like 4K, larger screen sizes and smart TVs, is critical in the absence of global market growth.”