9% of U.S. broadband households plan to purchase a VR headset in the next year

Parks Associates today announced a new industry report revealing that 9% of U.S. broadband households plan to purchase a virtual reality headset within the next year. Virtual Reality: Disrupting the Entertainment Experience shows purchase intentions have nearly doubled since early 2016, when only 5% planned to purchase a VR headset. 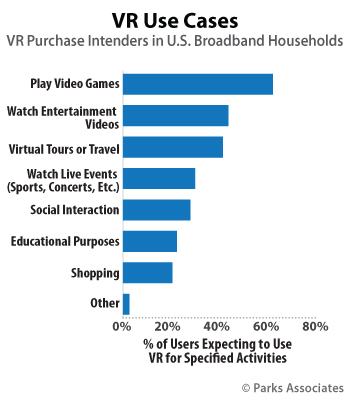 “The budding virtual reality market is just in its infancy,” said Hunter Sappington, Researcher, Parks Associates. “VR has the potential to breathe new life into important CE device categories that have reached saturation, but challenges are hindering wider adoption. Familiarity is low, with fewer than 13% of consumers having experienced VR first hand. The evolution of multiple players, each with their own approach to headset hardware, has resulted in a fragmented marketplace, which affects both content availability and future innovation. Despite these factors, the market is experiencing positive growth, with year-over-year increases in adoption and purchase intentions. The VR market will see changes over the next two to three years, with new technologies such as eye tracking and mixed reality being integrated into the evolving VR experience.”

Parks Associates reveals that Samsung’s Gear VR currently leads the VR market, with Sony’s PlayStation VR taking the second spot. Among U.S. consumers who purchased a VR headset in 2016, 31% bought a Samsung VR and 12% bought a PlayStation VR. Parks Associates forecasts approximately 24 million households worldwide will own at least one virtual reality device by year-end 2017 and 77 million households by 2021.

“Virtual reality has the potential to impact multiple industries beyond entertainment with its versatility and ever-increasing applications, including health, education, and industrial design,” said Tu Skuse, Research Analyst, Parks Associates. “Gaming is, by far, the leading use case, but potential VR buyers are also showing interest in videos, virtual sports stadiums, and virtual tours. Players like Google, Samsung, and Facebook are pushing VR into new areas, including content, mobile, and social use cases. As headsets become increasingly available and users experience VR for themselves, interest will grow. An expanding base of users will be key in motivating hardware makers, retailers, content producers, and service providers to continue to invest in this promising technology.”

Virtual Reality: Disrupting the Entertainment Experience studies virtual reality hardware including headsets and peripherals. It assesses the five VR headset market leaders, their products, and their strategies, as well as additional noteworthy headsets both on market and in development. The report, which includes five-year global forecasts of households adopting VR headsets, explains the differences among the various VR techniques and assesses how these methods are shaping VR product development.