Which TV Platforms Offer the Most, and Least, Value for the Money?

Highlights from the study: 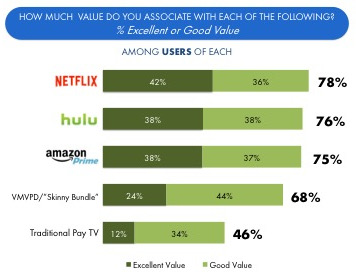 “It’s not news that that consumers think platforms like Netflix are a better deal than traditional TV bundles”, said Jon Giegengack, principal at Hub and one of the authors of the study. “What is surprising is the impact things like TV Everywhere and Netflix integration have on satisfaction among pay TV users. In a world where consumers are overwhelmed by choice, pay TV operators’ ability to aggregate could be a powerful differentiator.”

“Aggregation of content is clearly one way for pay TV providers to add value for their subscribers, but we also know how much consumers dislike the idea of paying for content they never watch,” said Peter Fondulas, principal at Hub and co-author of the study. “As long consumers continue to view only a small portion of the networks they get in their MVPD bundle—as we’ve seen in other research—they’re likely to continue to feel their pay TV subscription offers less than optimal value.”

“What’s TV Worth” was conducted among 2,296 US consumers with broadband, who watch at least 1 hour of TV per week. The data was collected in April 2018. Access the full findings from the study here.

Hub Entertainment Research measures and interprets the influence of technology on the ways consumers discover and consume entertainment in today’s rapidly changing media environment. We are experts in our field and work with industry leaders to assess the present and forecast the future.