Parrot Analytics finds 49% of U.S. consumers unwilling to pay for even one streaming service

LOS ANGELES — In its latest Global Television Demand Report, Parrot Analytics, the leading television data analytics firm focused on measuring global demand for content, features a four-country audience study focused on consumers’ propensity to subscribe to streaming video services in Brazil, Italy, the U.K. and the U.S.. Parrot Analytics investigated consumers’ willingness to subscribe to up to four streaming subscription video services in March 2018. For the U.S. panel, nearly half of the respondents (49%) said they were not willing to pay for any video subscription streaming service. 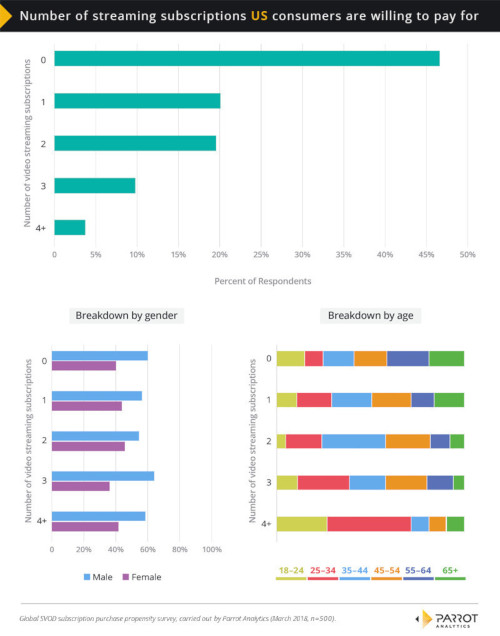 “We were really surprised s how consumers’ willingness to pay for multiple SVOD services is different for each of these markets, especially Italy, and it was interesting to discover that U.S. consumers were the most reticent of the four markets we examined,” said Samuel Stadler, Vice President of Marketing, Parrot Analytics. “However, our findings were in line with the latest Netflix subscriber numbers, which show about 20% of the U.S. population having subscribed to their service – the same number we found that are willing to pay for one service, so that makes sense. What was also a consistent theme in our study is that for every market we looked at, males are more willing to pay for SVOD services than females.”

The Global Television Demand Report also looks at the most popular digital original series from January to March in ten different countries: Australia, Belgium, Brazil, Greece, Italy, Netherlands, South Korea, Switzerland, the U.K. and the U.S. The top digital series in the U.S., Switzerland and the U.K. was CBS All Access’ drama Star Trek: Discovery, edging out Netflix’s Stranger Things. However, Stranger Things was the top digital series in Australia, Belgium, Brazil, Greece, Italy, South Korea, and the Netherlands for the quarter. Parrot Analytics ranks TV series across both SVOD and linear/broadcast channels in 100+ markets using its global TV demand measurement system, which collects billions of daily consumer Demand Expressions (streaming, downloading, social media interactions, blogging etc.) and then weights and ranks these audience demand expressions according to their significance .