US: Netflix grabs the most attention, but its reign will be challenged

NEW YORK, NY — Netflix and YouTube may be the video platforms US adults are watching most, but their days at the top may be numbered. New services such as Disney+, HBO Max and Apple TV+ will fragment digital video viewing time even further. According to our first forecast on time spent watching Netflix and YouTube, both platforms will see their share of daily video time drop in the coming years. 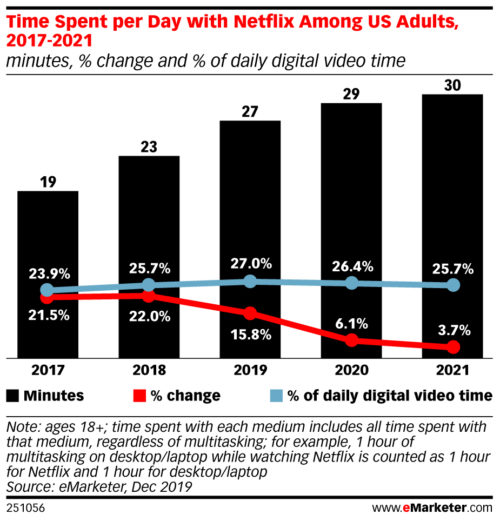 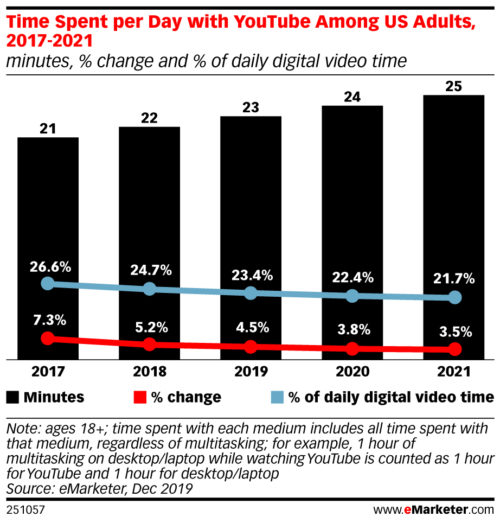 Similarly, YouTube’s share of total daily digital video time will drop from 23.4% this year, to 21.7% by 2021. It will continue to trail No. 1 player Netflix throughout the forecast period. 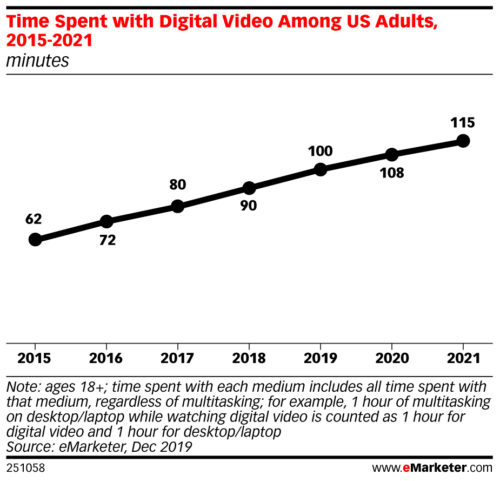 “Even though Americans are spending more time watching Netflix, people’s attention will become more divided as new streamers emerge,” eMarketer analyst Ross Benes said. “The video streaming landscape will get crowded, which will drive down the share of time that people devote to Netflix.”

Netflix is expected to continue pouring millions into its content library and investing in its AI discovery technology. That will help drive not only growth in subscribers, but also increased viewing time among users. Average daily Netflix viewing time among adult users will increase by 2.2% to 56.6 minutes per day in 2020.

In terms of total video time, 2019 will be the first year in which digital video will make up more than one-quarter (25.4%) of all daily digital time. This includes time spent on apps and browsers (but excludes social) on all devices.

“Video streaming is a mainstream, daily routine for most US adults, occurring on all devices and increasingly when viewers are on the go,” eMarketer senior forecasting analyst Oscar Orozco said. “In fact, an April 2019 study from OpenX found that nearly one-third of users of subscription streaming platforms say screen size has no impact on what they watch or for how long. Because of this, video will continue to be the main driver of digital media consumption in the coming years.”