NEW YORK — The majority of Americans (59 percent) are not willing to pay more than $20 a month for streaming TV services, according to a recent survey of more than 2,600 U.S. consumers by The Trade Desk. Furthermore, 75 percent of consumers will not pay more than $30 a month. As more TV content providers launch new streaming services in 2020, these results highlight the subscription fatigue threshold for TV streaming services, where on-demand movies, TV shows and live events can be accessed by connected devices such as smart TVs and mobile devices.

Other key findings of the survey include: 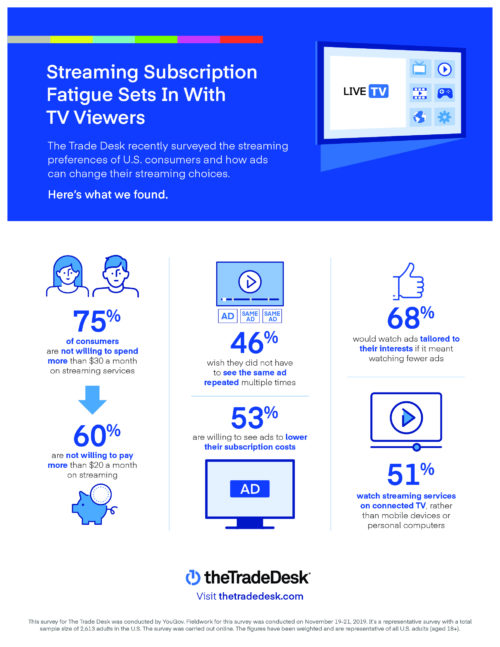 As more U.S. consumers watch TV content via streaming services online, content providers are under pressure to produce new premium content that drives membership and viewership. This research suggests, however, that there are hard limits to consumer appetite for subscription-based services. As a result, streaming companies must decide whether and how to incorporate advertising-supported tiers to their platform.

The survey indicates a willingness from consumers for streaming services supported by ads, particularly if the format and pacing of commercial breaks differ from traditional TV content. More than half (53 percent) of respondents are willing to watch ads every other episode to lower their monthly costs on a device that doesn’t show any ads. Forty percent of consumers would prefer ads tailored to their interests and preferences, but, among those who said they wouldn’t, that number increases to more than two-thirds (68 percent) if it meant they would see fewer ads.

“With consumers experiencing subscription fatigue and unwilling to subscribe to more than one or two premium services, broadcasters have to figure out how to continue to fund this new golden age of TV,” said Brian Stempeck, Chief Strategy Officer, The Trade Desk. “At the same time, consumers are willing to view ads if it means their subscription costs go down, even more so if those ads are relevant to their interests and are just not the same ads over and over again. This indicates that ads will fund the future of streaming TV, and that broadcasters and advertisers have an opportunity to improve the advertising experience in a way that simply is not possible with traditional, linear TV.”

While consumers have a limit to how much they are willing to spend on streaming – an increasing concern given the proliferation of streaming services – the research also shows that nearly half (46 percent) of Americans do not want to see the same ad repeated multiple times and more than one-third (36 percent) wish there were fewer ad breaks.
Despite the mobile nature of streaming apps, consumers have shown they still prefer to view content on the largest screen in their home – the television. More than half (51 percent) of those consumers who watch new episodes of their favorite shows on an app after it premieres watch a TV show on their connected televisions, rather than a mobile device or on their personal computer.