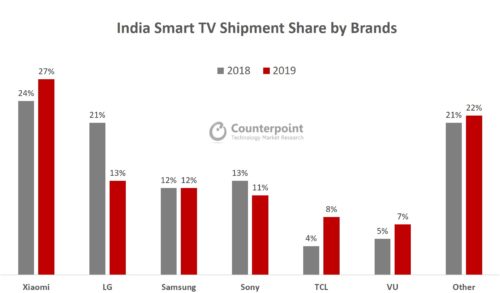 Highlighting the India TV market growth, Senior Analyst, Karn Chauhan notes, “India is one of the largest markets in the world with more than 200 million potential TV households and is still underpenetrated which makes India a more attractive growth market for the entire TV and content value chain. The growing number of smartphone users in India is also driving a need for Smart TV as users look to continue their streaming content consumption on the bigger screens when at home. The broader broadband penetration in the home will further drive the overall smart TV usage. Though affordability and value for money are the key growth drivers. The new crop of brands such as Xiaomi, TCL and others are tapping their existing relationships with e-commerce channels such as Flipkart, Amazon, etc to successfully distribute the TVs affordably with a direct-to-consumer model.”

Commenting on the competitive landscape, Research Analyst, Debasish Jana, shared, “Samsung continues to lead the overall TV market but the emerging smart TV segment is being cornered by the newer players. Smart TV was the fastest-growing segment up 25% YoY. The smart TV market in India was mostly driven by brands like Xiaomi, Samsung and emerging tail brands such as TCL, Vu and others, which are leveraging their growing channel presence both online and offline to target the new users and upgrade users.

Non-smart TV grew by 7% YoY in 2019. While Samsung, LG, Sony are experiencing a YoY decrease in their non-smart TV business, brands like BPL, Sansui and others are still banking on the non-smart TV segment that mainly caters to the rural market, B2B segment or a second bedroom TV in many cases.”

Mr. Jana, further added, “Brands like Xiaomi, TCL, VU have been expanding over the last few years taking on incumbents such as Samsung. LG, Sony, and Panasonic. Furthermore, 2019 was marked by the entry of smartphone brands such as Motorola, Nokia, OnePlus with their Smart TVs looking to build a connected device story complementing their smartphone devices. These new-age brands from Xiaomi to OnePlus are offering high specifications, some unique features at highly affordable price-points targeting urban users via e-commerce channels. This has led to some serious price-cuts by competition during the year to match the value proposition from these Chinese brands leveraging the cost-effective e-commerce channels.”

For example, Xiaomi is offering a 55-inch smart TV with a 4K panel at below INR 50,000 (USD$ 675), while TCL is selling its AI-powered 55-inch 4K TV at only INR 35,000 (USD$ 475) and OnePlus with its attractively designed 55-inch 4K QLED TV with 50-watt Soundbar for INR 100,000 (USD$1500). These cutting-edge but relatively affordable offerings have been steering mature smartphone users to purchase large-sized smart TVs. This strategy helped brands such as Xiaomi and TCL to grow its shipment volumes by 40% and 110% YoY respectively in 2019.

Our detailed report on TV market in India can be found in our research portal.