LONDON — The second quarter of 2022 was the third consecutive quarter of weakening revenue growth for the semiconductor market, with the market now in decline according to Omdia’s Competitive Landscape Tracker. Revenue for 2Q22 declined 1.9% from $161.2 billion in 1Q22 to $158.1 billion in 2Q22. This decline follows the longest sustained period of semiconductor growth of eight uninterrupted quarters.

Cliff Leimbach, Senior Research Analyst at Omdia said: “The recent decline in semiconductor revenue has led to 2Q22 being recorded as the third-worst performing Q2 in twenty years of Omdia tracking the market. Changes are coming after an unprecedented run of demand growth from work-from-home and educate-from-home activity. Given the cyclical nature of the semiconductor market, we expect the remainder of 2022 and potentially the first half of 2023 will be an adjustment period as the market returns to normalcy.”

A contributing factor into the current semiconductor decline is Intel’s 2Q22 performance and a decline of 13% in their microprocessors (MPU) business in 1Q. This drop from a market that represents over 10% of the total semiconductor market has pulled the entire market down.

Additionally, the US dollar strengthened against many foreign currencies in 2Q22 from 1Q22. Companies that report revenue in foreign currencies saw a fall in revenue when converting to US dollars. Some non-US based companies experienced a quarterly revenue increase in local currency but a negative quarterly increase from a US dollar perspective. Together, these factors have exerted a downward influence on the total semiconductor market revenues in US dollars. 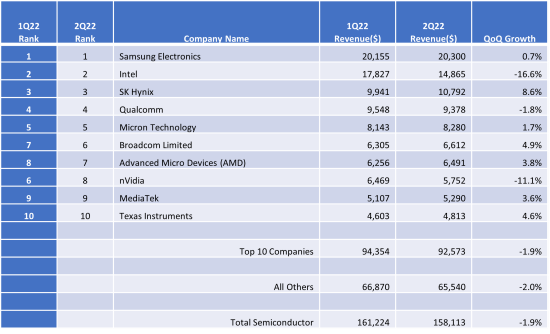 A review of the top semiconductor firms’ performance highlighted Intel and NVIDIA’s decline combined was $3.7 billion in 2Q22; a result of weak consumer demand for their products and OEMs holding less inventory in these uncertain times. The only other top-ten firm by revenue to decline in 2Q22 was Qualcomm. The remaining companies increased in revenue during the quarter.

The memory market increased slightly in 2Q, up just over 1%. Samsung is the number one DRAM and NAND firm. This combined with Intel’s results solidified Samsung into the top semiconductor firm by revenue.