While the consumer electronics headlines this year have been dominated by 3-D television news, the real story in 2010 is about Internet-Enabled TVs (IETVs), according to iSuppli Corp. 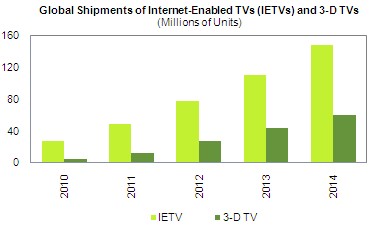 Global shipments of IETVs–i.e., TV sets with built-in Internet capability–will amount to 27.7 million units in 2010. In contrast, 3-D set shipments will total only 4.2 million this year. While 3-D television shipments are set to soar in the coming years, iSuppli’s forecast shows the biggest near-term growth story is in IETV.

“Despite aggressive promotions from the industry and intense consumer interest generated by the blockbuster Avatar and other titles, the 3-D TV market in 2010 will be limited to a small pool of enthusiastic early adopters,” said Riddhi Patel, director and principal analyst for television systems at iSuppli. “In contrast, IETV is entering the mainstream in 2010. This is because 3-D is still dealing with a number of barriers, including cost, content availability and interoperability, while IETV provides immediate benefits by allowing TV viewers to access a range of content readily available on the Internet.”

Shipments of IETVs in 2010 will rise by a remarkable 124.9 percent from 12.3 million units last year. Significant growth will continue during the following years. All told, IETV shipments will expand at rates north of 50 percent for the next two years, and then continue to increase at solid double-digit rates until the end of 2014. By then, global IETV shipments are anticipated to reach 148.3 million units, accounting for 54 percent of the total flat-panel TV market.

With IETV, Patel noted, viewers can connect to the Internet at all times by using their TV’s built-in feature, bypassing the need for a bridge device such as a set-top box, game console or Internet media adapter like Apple Inc.’s TV console. Such connectivity allows viewers to access content from a wide spectrum of providers–ranging from movie peddlers like Netflix and Amazon, to content aggregators such as Hulu, to social networking sites like Facebook and Twitter.

At the same time, TV brands and manufacturers are working aggressively to create partnerships with the content providers in order to keep consumers interested and happy with continually updated material, Patel added.

“The arrival of Internet-enabled TV models is part of the ongoing evolution and enhancement of TV sets,” Patel said. “Because innovation is a must in order to drive consumer adoption and replacement, the TV industry has embarked on a path of enhancing the consumer experience through interaction with their TV sets.”

Among regions, North America and Western Europe will make up the largest consumption market for IETVs from 2010 to 2014. Japan will lay claim as the third largest market only until 2012, after which it will drop to fifth place, ranking behind both China and the collective area designated as Rest of Asia-Pacific–two distinct territories counted separately in the tallies.

Semiconductor Grows Because of IETV

From a semiconductor perspective, IETV will represent a strong growth opportunity for a number of component types in the TV semiconductor space, including multi-format decoders, DRAM and interface Integrated Circuits (IC), according to Randy Lawson, principal analyst, display electronics, for iSuppli.

Combined revenue from sales of these semiconductors will rise to more than $2 billion by 2014, up from just $222 million in 2009, iSuppli figures show.

The increased semiconductor content will be needed to support various complex IETV features, including network interface capability via Ethernet to link the television to the Internet–through either a wired connection or wirelessly–Bluetooth solutions for advanced remote controls and greater video graphics support.

Collectively, the new features and capabilities needed by IETVs will provide the TV semiconductor market with a much-needed lift in the general outlook affecting the core audio-visual processing and interface IC solutions, according to iSuppli. The prospect is encouraging, given that the general trend of integration and cost-reduction pressure has slowed growth of the market in this space in recent years.

Overall, IETV will represent the second-best growth area for the TV semiconductor market, next only to LED backlighting.