Google and Apple have a significant competitive advantage in the battle for the connected consumer. Having moved beyond a single product category focus, these new media competitors operate digital ecosystems where devices, services, and content, from hundreds of third-party companies, combine to create consumer value far greater than is possible from any single product, or company. New In-Stat research, Media Giants Compete for Multiscreen Digital Content Dominance (#IN1104881CM), reports that currently, over 40 million US broadband households own and operate an Apple device. Google’s fast growing ecosystem, based on the Android OS, is expected to double in size over the next five years. 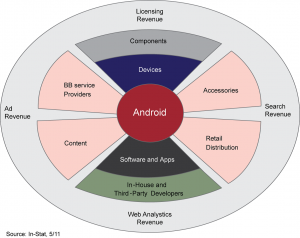 “Not long ago devices were independent of services and video content; however, those days are long gone,” says Keith Nissen, Research Director. “Today, nearly all CE devices are becoming web-enabled, linking them to online applications, services, and vast libraries of digital content. The success of Apple has highlighted the inherent advantages of a comprehensive digital ecosystem. Today, the largest digital media giants such as Microsoft, Disney, and Sony Corp, have to craft their own digital ecosystem strategy to selectively compete and sometimes complement those of competitors. At the same time, more narrowly focused device manufacturers, operators, and online portals need to navigate and position their products in the competitive landscape among the dominant digital ecosystems.”

Some of the research findings include:

For pricing or a free sample of the report and more information contact Elaine Potter, [email protected]; (480) 483-4441.