EL SEGUNDO, Calif. — Following a 2.5 percent decline in 2012, the global semiconductor market has regained its footing in 2013 with revenue set to expand by nearly 5 percent because of the strong performance of the memory sector.

Global semiconductor sales in 2013 will amount to $317.9 billion, up 4.9 percent from $302.9 billion in 2012, according to preliminary estimates from the Semiconductor Value Chain Service at IHS Inc. (NYSE: IHS). Market growth is being driven by the strong expansion of the dynamic random access memory (DRAM) and NAND flash memory markets, which are expected to rise by 35.0 percent and 27.7 percent, respectively, in 2013.

Partly because of its success in the booming DRAM and NAND markets, U.S.-based Micron Technology Inc. will grow by an industry-leading 109.2 percent in 2013, catapulting the company up the semiconductor market’s ranks to No. 4 in 2013, rising from No. 10 in 2012.

“Memory chips are coming to the rescue of the semiconductor business in 2013,” said Dale Ford, head of electronics and semiconductor research at IHS. “Solid pricing and expanding demand for DRAM and NAND in smartphones and tablets have caused revenue for these memory devices to surge. Without these two high-performing product segments, the semiconductor industry would attain zero growth this year.” 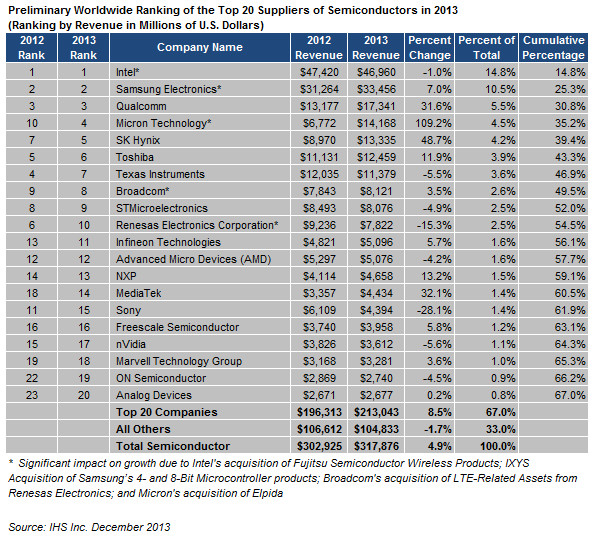 Micron is expected to end the year with $14.2 billion in semiconductor revenue, more than doubling its $6.8 billion total in 2012. In addition to its success in DRAM and NAND, Micron’s growth in 2013 is being propelled by its acquisition of Elpida Memory.

Also benefiting from the memory boom is SK Hynix of South Korea, whose chip revenue is on track to expand by 48.7 percent in 2013. The company will jump to No. 5 in the semiconductor market rankings in 2013, up from No. 7 in 2012. SK Hynix’s performance is all the more outstanding since it was entirely driven by organic sales growth—and not by any acquisitions.

Qualcomm closes in on market leaders

Qualcomm Inc.’s incredible success in the wireless world continues to drive it to the top of the semiconductor industry. The U.S. company is set to attain 31.6 percent semiconductor growth in 2013, causing it to gain1.2 percentage points of share and take 5.5 percent of total semiconductor market revenue. No. 3-ranked Qualcomm’s strong growth in 2013 will allow it to narrow its market share gap with industry leaders Intel Corp. and Samsung.

Sony, Renesas Electronics, and Rohm Semiconductor are set to deliver disappointing results with expected declines of 28.1 percent, 15.3 percent and 14.3 percent, respectively. As a result, Renesas will drop all the way to No. 10, down from No. 6 in 2012, and Sony will fall to No. 15, declining from No. 11. Rohm Semiconductor will completely fall out of the ranks of the Top 20.

Texas Instruments and nVidia also are struggling in 2013 with the companies suffering declines of 5.5 percent and 5.6 percent, respectively.

Intel will maintain its status as the No. 1 semiconductor supplier, but its projected semiconductor revenue decline of 1.0 percent means it will drop from its historically high 15.7 percent share of the market in 2012 to 14.8 percent in 2013.

Of the major application markets for semiconductors, the hot wireless segment will drive the largest increase in semiconductor consumption of chips in 2013. Semiconductor revenue from wireless communications products are projected to grow by 11.7 percent in 2013.

The next fastest-expanding application will be industrial electronics, with double-digit semiconductor sales growth of 10.7 percent.

Semiconductor revenues driven by consumer electronics products will decline, with a drop of 5.2 percent.

Asia-Pacific will lead all regions in terms of consumption of semiconductors with growth of 8.9 percent in 2013. The Americas will not be far behind with a 5.0 percent increase. Japan will experience a decline of 7.9 percent.

Overall, 53 percent of the more than150 companies tracked by IHS are expected to expand their semiconductor revenue in 2013, while 47 percent will decline.

Beyond the DRAM and NAND segments, other products that will yield healthy growth in 2013 are expected to be light-emitting diodes (LEDs) with 9.5 percent, complementary metal-oxide semiconductor (CMOS) image sensors at 5.7 percent, standard logic up by 4.2 percent, sensors and actuators by 3.6 percent and analog application-specific integrated circuits with 3.5 percent.

Markets experiencing significant declines will be charge-coupled device (CCD) image sensors, which are expected to plunge by 40.6 percent; specialty memory, with a 19.6 percent drop; digital signal processors, down by 16.5 percent; SRAM declining by 15.9 percent; NOR flash memory falling by 14.8 percent and logic ASICs, with an 11.6 percent decrease.