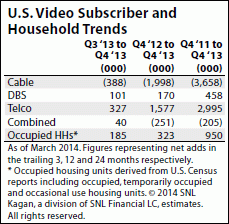 According to the tally for the trio of platforms, service providers collectively shed 251,000 in 2013, dipping to approximately 100 million combined subs. The industry added 40,000 video subscriptions in the fourth quarter, slightly weaker on a year-over-year basis and not enough to offset the broader downward momentum.

However, the fourth-quarter subscription bump did not carry enough magnitude to lift the penetration rates sequentially, according to SNL Kagan analysis. Housing formation was modest but still outpaced new subscriptions. The SNL Kagan approach that combines the U.S. Census Bureau categories of temporarily occupied and occasional use housing units produces a sequential net gain of 197,000 occupied units to nearly 115 million at year-end.

Losses from cable providers fueled the overall declines, but the estimated figures for the industry did show some improvement in the fourth quarter on both sequential and year-over-year comparisons. SNL Kagan estimates cable operators lost nearly 2 million video subscriptions for the full year and 388,000 in the fourth quarter to finish 2013 with fewer than 54.4 million basic subs.