PORT WASHINGTON, N.Y. — The electronic sell-through (EST) TV and movie market has grown since 2012 to more than $1 billion with EST sales now representing almost 14 percent of the 2013 physical and digital home video purchases, according to The NPD Group’s EST: Analysis and Perspective.

EST movie transactions grew 68 percent year-over-year in Q1 driving most of the total EST sales and accounting for 10 percent of all physical and digital movie purchases. Despite the improved growth of EST movies, EST TV show unit volume is still a much more significant part of the total EST market. 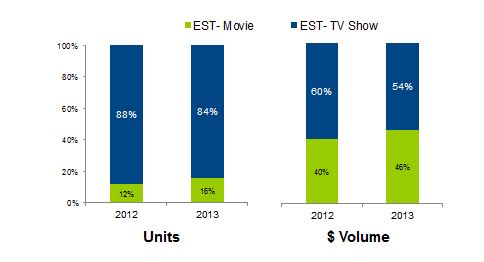 “Much of the growth in EST is being driven by new digital buyers being drawn into the market,” said Mark Kirstein, president of entertainment for The NPD Group. “Most of the 11 million EST consumers are purchasing digital transactions in addition to physical DVDs and Blu-ray discs; only a small percentage exclusively purchase digital.”

The EST market is getting a boost as new multichannel video programming distributors (MVPD) and digital retailers join the market and new titles get early release windows.

“Comcast joined Verizon as the second major MVPD to offer EST and we expect more to join the EST market moving forward,” said Kirstein. “EST will become an important complement to Video-on-Demand, TV Everywhere, and traditional pay TV services, as it drives incremental revenue and contributes to subscriber retention.”

This report is based on consumer research data from the following two sources: