NOW TV is this week launching a brand new weekly pass for sports fans looking to watch even more of the best live sporting action from Sky Sports.

Available from this Thursday for just £10.99 for a limited time only, the Sky Sports Week Pass will offer all 7 Sky Sports channels for 7 days – satisfying the needs of every fan who feels like a day’s worth of action is just not enough. This includes brand new channel Sky Sports 5, the new home of European Football, and the new-look Sky Sports News HQ, which both launch tomorrow. 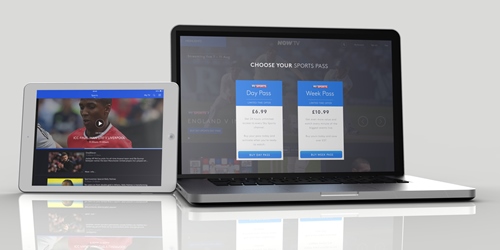 Football fans can look forward to the fast approaching new Premier League season on Sky Sports, which broadcast 49 of the 50 most watched Premier League matches last season. It will once again offer an unrivalled schedule of live fixtures from August 16. Only on Sky Sports can viewers see matches involving last season’s top 4 teams – Manchester City, Liverpool, Chelsea and Arsenal – live across the opening weekend of the season, with Premier League champions City beginning their title defence away to Newcastle United.

Before December fans will be able to watch more of the games that matter with Sky Sports scheduled to show all of last season’s top 4 teams at least 6 times and every club at least three times. Analysis will once again be provided by the best football experts on British television; Gary Neville, Jamie Carragher, Jamie Redknapp and Graeme Souness.

August also sees the launch of Sky Sports 5, showing up to 600 live matches next season from European Qualifiers for UEFA EURO 2016, UEFA Champions League, La Liga, Copa del Rey, Coppa Italia and Eredivisie. In addition Sky Sports News HQ will relaunch on 12 August putting the viewer at the heart of sports news with a new schedule and upgraded studio.

In September customers can enjoy an entire channel dedicated to The 2014 Ryder Cup. For the first time ever, Sky Sports 4 will become ‘Sky Sports Ryder Cup’ showing over 330 hours of golf across 14 days, including 36 hours of live coverage from Gleneagles.

The new NOW TV Sky Sports Week Pass will be available alongside the Sky Sports Day Pass, which will now be just £6.99 for a limited period, offering sports fans even greater choice, flexibility and value for money when it comes to watching the biggest sporting events.

Gidon Katz, Director of NOW TV comments: “With the start of the football season just days away, this is a great time to be giving sports fans even more choice. We know our sports fans are hungry for more flexibility in how they watch sports and the new Sky Sports Week Pass offers just that. Now fans simply have to decide if they want to snack on a day pass or feast on a week’s sport for just £10.99.”