SANTA CLARA, Calif. — Global TV shipments declined 8 percent, year over year, to 48 million units in the second quarter (Q2) of 2015, after a year of quarterly year-over-year growth in 2014. This was the largest year-over-year decline in a quarter since Q2 2009, when worldwide demand slumped amid the global recession, according to IHS Inc. (NYSE: IHS), the leading global source of critical information and insight. Most of the overall decline is attributed to slowing growth in liquid crystal display (LCD) TVs, which now account for 99 percent of all television shipments. LCD TV sales have not made up for the lost volume of cathode-ray tube (CRT) and plasma televisions, which have largely left the marketplace.

“2014 was a robust year for growth, with total TV shipments rising 3 percent worldwide, and developed regions growing more than 6 percent,” said Paul Gagnon, director of TV research for IHS. “This year, however, TV demand is being negatively affected by the current global economic slowdown, particularly the rise in currency prices against the U.S. dollar, which has caused retail prices to increase in emerging markets.”

According to the latest TV Sets Market Tracker from IHS, while the downturn in shipments was felt in Western Europe and Japan, the decline was most pronounced in the emerging regions of Latin America, Asia Pacific, Eastern Europe, the Middle East and Africa. Although North American demand returned to positive in Q2 2015, Western European shipments fell unexpectedly, leading to a 3 percent reduction in overall shipments to developed regions. China, considered to be an emerging market, exhibited growth in shipments in the first half of 2015, but that momentum is slowing. Looking at larger emerging markets outside of China, the decline in shipments this year has been very pronounced, despite a government subsidy program in Mexico that added more than 2 million units in the first half of the year. TV shipments in Latin America declined 17 percent year over year in Q2, with a significant amount of weakness out of Brazil, while Asia-Pacific shipments fell more than 9 percent. “Many global brands are shifting to a weaker outlook for the balance of the year, as a result of the broad decline in demand worldwide,” Gagnon said. 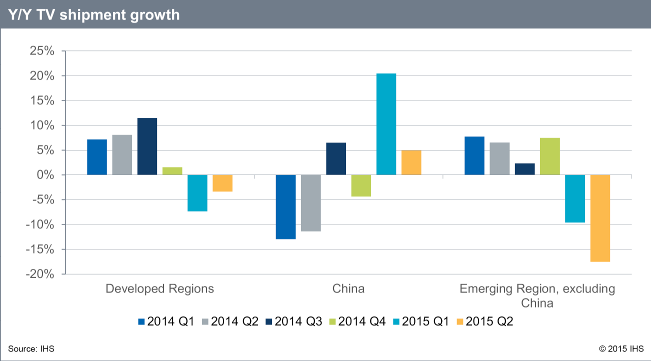 4K TV was a bright spot in the global TV market, with unit shipments growing 197 percent year over year in Q2 2015, to reach 6.2 million units. The growth in 4K TVs is the direct result of increased price erosion and more affordable tiers of 4K models becoming available.