PARIS — Eutelsat Communications (NYSE Euronext Paris: ETL) has crossed the threshold of 6,000 channels broadcasting via its fleet, further consolidating its position as a premium satellite operator and service provider to the global broadcasting industry. 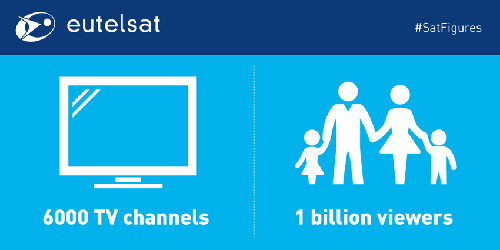 Eutelsat continues to register strong channel growth in fast growing markets, notably in the Middle East and Africa, with one out of three channels on its satellites targeting these fast-growing regions. In Sub-Saharan Africa, half of the 1,136 satellite channels broadcast today are transmitted by Eutelsat. The share of Eutelsat channels in the total satellite offer in the Middle East and North Africa is even higher, with two out of three channels choosing Eutelsat, notably the 7/8° West neighbourhood where 80 channels were added in October 2015 on the new EUTELSAT 8 West B satellite.

With over 2,200 channels available free-to-air, Eutelsat is the satellite company broadcasting the highest number of subscription-free channels. New features will be introduced in 2016 giving channels higher visibility and offering viewers more information on the exceptional line-up of free content. They will start with the HOT BIRD position that offers over 400 subscription-free channels across Europe, North Africa and the Middle East.

Through continued investment in advanced broadcasting infrastructure, Eutelsat will continue to develop its offer in mature video markets and accelerate partnerships in fast-growing regions, notably Latin America that is set to benefit from two new satellites: EUTELSAT 117 West B and EUTELSAT 65 West A. Renewed capacity across Eutelsat’s global footprint will also answer viewer demand for higher signal quality. HDTV already accounts for over 12% of the total channel count and continues to rise, notably in Europe and the Middle East. Ultra HD, the next step-up in image quality, represents a future driver for growth. Eutelsat has been validating the Ultra HD broadcast chain with leading players and is now transmitting its first commercial Ultra HD channels in Russia and Europe.

Commenting on the new milestone of 6,000 channels, Michel Azibert, Commercial and Development Director at Eutelsat, said: “Broadcasting is at the heart of Eutelsat’s DNA. We have invested in and developed video neighbourhoods across the globe, spearheaded the transition to new formats and compression rates, partnered with anchor Pay and Free-to-View platforms and are developing solutions in step with changing viewing patterns. In the fast-evolving world of video content distribution we are continually focused on supporting broadcasters to enhance their relationship with viewers and expand their reach. The milestone of 6,000 channels sets a new record for Eutelsat and reflects our resolve to be the satellite company of choice for the broadcasting community.”