Over a third of Australians now watch TV 'On Demand'

TV today: free and paid, linear and on demand

Nine in 10 Australians 14+ (90.2%) watched any ‘Linear’ free-to-air (FTA) television during an average week in the first four months of 2016: they turned a TV on and watched the broadcast from network Seven, Nine, Ten, ABC, SBS or an affiliate or secondary channel (that thing we could all once just call ‘watching TV’ without further explanation).

Of course, many Australians now watch TV in multiple ways. The below Venn diagram shows how many of us are watching in one, two or all three ways: 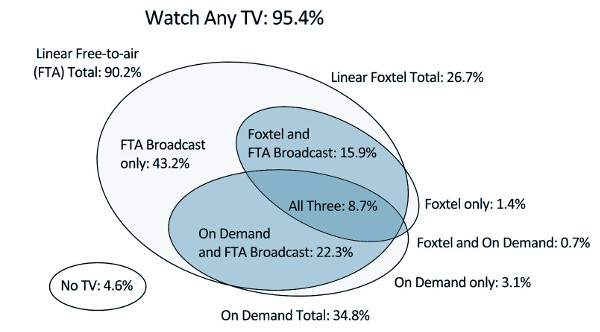 Tim Martin, General Manager – Media, Roy Morgan Research, says: “Since early 2015 we have been measuring with greater detail than ever before the incremental audience reach, overlap and exclusive watching of On Demand and streaming audiences.

“Now, for the first time in the Australian market Roy Morgan is able to compare and contrast the size and reach of each of FTA terrestrial television and On Demand TV including Netflix, Stan, Presto, Foxtel Go, Foxtel Play.

“This provides some really interesting insights which will be useful for broadcasters and cross platform media owners as the media landscape continues to fragment. One such insight is more people collectively watch any form of On Demand than watch Foxtel through the Set Top Box.

“Roy Morgan recently announced enhancements to its system of media measurement. The new data will transform how publishers, advertisers and media agencies understand and measure online behaviour. Underpinning the data is ‘gold standard’ research, using a probabilistic sample recruited face-to-face – simply the only way to produce results that can be reliably projected to the total population. This research is supplemented by machine based online data collected via software, as well as data collected from digital pixels placed on websites.

“This approach now captures online media visitation across all platforms, operating systems and devices to generate the most accurate and comprehensive view of online behaviour in Australia.”