Five million Australians now have Netflix; Stan and Presto are still well behind, but growing

Almost five million Australians (14+) now have Netflix, the latest results to May 2016 from Roy Morgan Research show—and with the free trials and free versions wrapping up, nearly all subscribing homes are paying for the Subscription Video On Demand (SVOD) service.

After a stellar run in 2015, Netflix has continued to grow: up to 1,878,000 subscriptions (number of subscribing homes) in the three months to May 2016, including paid, free trials, and special offers from third parties—and in these homes live 4,950,000 Australians.

Total Reach (and Subscriptions) of Netflix, Stan and Presto 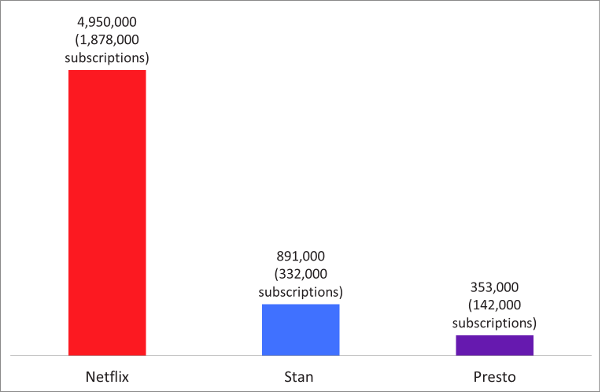 However while Stan and Presto are growing, Netflix’s advantage is also clear in the proportion of its subscribers who are now paying for the service, rather than accessing it via a free version through a special offer or on their first month of free trial.

78% of Stan subscriptions are paid: an estimated 260,000 homes paying $10 per month. However just 64% of Presto’s subscribers (only around 91,000) are currently paying $10-15/month for the service, with over a third on a free trial or subscribing for free through a bundle (such as Foxtel’s Platinum package).

Proportion of Subscriptions: Paid or Free

Michele Levine, CEO – Roy Morgan Research, says: “With the rapid take-up of Netflix throughout 2015, it was clear that SVOD was becoming a major new component of Australia’s media landscape.

“Roy Morgan has independently measured the rise of SVOD from the beginning. From January 2016, Roy Morgan further broadened its research into the rise of SVOD among consumers, going beyond subscription numbers to also measure actual usage and whether the service is paid-for (either personally or by another household member), part of a bonus offer (such as through a telco), or on free trial.

“The first step for SVOD providers has been to get homes (or, really, just one particularly keen SVOD viewer in the home) to subscribe on a free trial or through a package deal with a telco—the next step is to turn them into loyal (or at least lazy!) customers who will continue to subscribe and pay each month.

“Stan in particular has been growing fast in 2016, with many Netflix subscribers now adding on a second SVOD service to meet their appetites for content. Around three quarters of homes with Stan also have Netflix. Part of SVOD’s appeal to consumers is that, unlike Pay TV, there is no lock-on contract. Both services will need to ensure, through timely delivery of new and exclusive content, that current customers remain customers.

“As SVOD continues to grow, our research will further examine switching and cancellations. Over the coming weeks, we’ll also look more closely at how many subscribers in the home are actually using these services and just how much they’re watching.”