BOSTON, MA — The online TV market appears to be settling on monthly or yearly subscriptions as its pay model of choice. One example: Hulu’s recent decision to discontinue it’s “free-with-ads” service and focus solely on it’s paid subscription tiers. 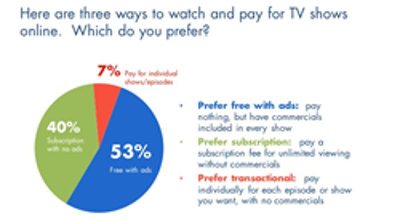 But in a new study from Hub, a majority of TV consumers (53%) say they actually prefer free TV, where they “pay” by viewing commercials.
However, the way viewers respond to ads themselves seems to run counter to this stated preference. In fact, majorities of TV viewers say they skip ads whenever they have the chance:

What’s more, when fast forward has been disabled on a TV platform, many TV viewers see that as more than just a minor annoyance.

What consumers seem to be saying is that ad supported TV is still an appealing pay model, but the way ads are incorporated into online TV disrupt the experience and make alternative platforms more appealing. The survey tested a number of ideas for making ads in TV content more engaging. Consumers had the most positive reaction to three strategies:

“Conventional wisdom says that consumers simply don’t like ads on TV. But what our study suggests is that they don’t like the way ads are delivered on TV,” said Peter Fondulas, Principal at Hub. “Consumers say they’d welcome having ads more targeted to their interests and product needs. And what’s especially interesting is that better targeting of ads based on past purchases doesn’t appear to raise major privacy concerns.”

“Some networks have already started down the path of reducing ad loads on TV, but making the ads themselves more relevant to the individual viewer is a tool that will make ad-supported TV more effective for advertisers, and more enjoyable for consumers”,” said Jon Giegengack, Principal at Hub.