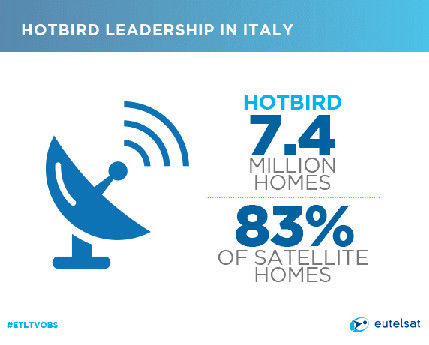 Eutelsat’s HOTBIRD satellites, that are the backbone of pay-TV and free-to-air viewing in Italy, account for 7.4 million homes. A further 763,000 homes are equipped to watch foreign-language channels from other Eutelsat neighbourhoods, led by EUTELSAT 16A, EUTELSAT 9B and EUTELSAT 7 West A. Ninety-five per cent of satellite homes in Italy are served by a Eutelsat satellite.

Eutelsat’s HOTBIRD satellites, already home to 345 Italian channels,are the clear platform of choice for exclusive free-to-air and pay-TV channels. They are also Italy’s hub for HD, with almost 100 channels and the first port for Ultra HD content. The Sky Italia platform has a subscriber base of 4.76 million homes at the HOT BIRD position and is driving HD take-up, with three out of four subscribers benefiting from its HD offer that today comprises 65 channels. A total of 2.8million homes are equipped for DTH reception of the Tivùsat free-to-view platform that now offers viewers 14 HD channels and RAI 4K, Italy’s first Ultra HD channel that is currently broadcasting the prestigious drama series ‘Medici: Masters of Florence’.

Overall, Italy’s satellite TV universe continues to expand and is the second most popular route to multi-channel viewing. Of a nationwide base of 25 million TV homes one in three has opted for satellite reception. Sixteen million homes watching TV only via the terrestrial network have a reduced offer of 50 channels, of which five in HD, while the IP base in highly urban districts has inched up to 430,000 homes from 240,000 in 2013.

Renato Farina, Managing Director of Eutelsat Italia, commented on the trends: “Satellite continues to make inroads in Italy’s digital broadcasting landscape, reflecting viewer expectation for diversity and the clear move towards better picture quality. Our new survey reveals that Eutelsat’s satellites, our technologies and our partnership models give broadcasters the flexibility to continually enhance the viewing experience and offer the benefits of choice and quality.”

Eutelsat’s TV Observatory is an extensive multi-national analysis of TV reception modes and trends. The market research in Italy was carried out in March-April 2016 via face-to-face interviews with 2,000 consumers, supplemented by secondary research data.