U.S. online video consumers have not yet taken to live TV streaming

New Study Reveals Consumers Are Not into Live Video Streaming 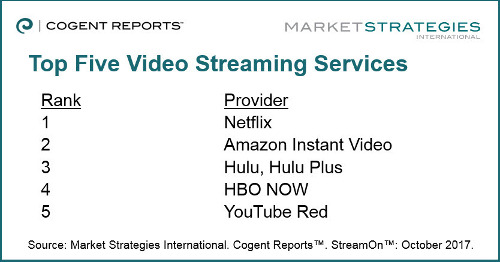 Nearly a dozen new name-brands entered the video streaming market last year, and virtually all of them offer and highlight live video streaming. With the exception of sports and news, our research shows that viewing live content is not in high demand as it is currently offered.

“TV providers are failing to recognize that the habits and needs of the viewer have dramatically changed, and the old rules of television no longer apply,” said Greg Mishkin, vice president of research and consulting at Market Strategies. “TV providers must evaluate and revise the business model to fit the needs of the consumer, because if they don’t they are setting themselves up to fail.”

This customer experience research shows that nearly three-quarters (73%) of the population use streaming services and nearly one-third (29%) of those who stream have either canceled or downgraded their traditional TV services. This signals a dramatic change in how television is sold. The most successful streaming companies are the ones that have gone outside the components of the traditional pay TV format: broadcast channels, scheduled live programming, and programming guides. Netflix is currently the leader in the video streaming industry and has set the bar for other streaming providers.

“While Netflix has the highest use rate and share of wallet by a long shot and is the provider to beat—there is not a clear winner yet. None of the current providers has cracked the code on what consumers want,” continued Mishkin. “However, the research clearly shows that the strength of the leaders is due to their ability to break free from the old rules of TV.”