12% of U.S. broadband households use a live streaming platform

DALLAS — Parks Associates today announced that as of Q3 2017, 12% of U.S. broadband households use a live streaming platform like Facebook Live or Periscope. The profile for live streamers is generally younger, with 19% of consumers ages 18-24 engaging in live streaming activity, but live streaming of TV shows and sports skews older, indicating more older viewers might be using these solutions to access illegal streams of content. 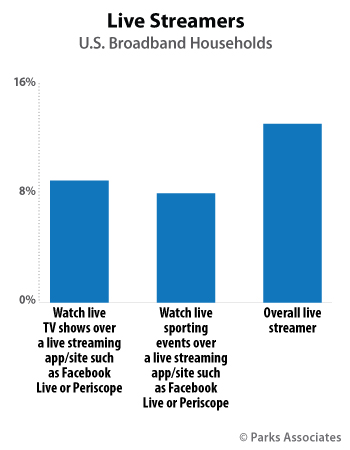 “Over one-third of households live-streaming TV shows or sports indicate the programming was available, but they opted for live-streaming because they did not want to pay for access. Over one-quarter stated that they accessed the content via live streaming because the price of the programming was too high,” Sappington said. “While these figures ultimately represent less than 5% of U.S. broadband households, they are a significant portion of those watching app-based live streams.”

Additional data from the report includes:

Brett Sappington will present Parks Associates research at this year’s Cable Congress in Dublin, March 6-7, and at 2018 NAB in Las Vegas, April 7-12.