35% of U.S. Smart Home owners use their devices as part of an ecosystem

Parks Associates: 35% of Smart Home Owners Operate Their Devices as Part of Ecosystem

DALLAS — New research from Parks Associates reveals 35% of smart home owners (8% of U.S. broadband households) use a smart home hub or app to control their smart home devices as part of an ecosystem, with smart speakers as the most prevalent controller. ‘360 Deep Dive: Smart Home Ecosystems: Driving the Smart Home Forward’ reports 5% of U.S. broadband households use their smart speaker with voice assistant as a hub, compared to 3% who use a home security system and 2% who use an independent home control hub. 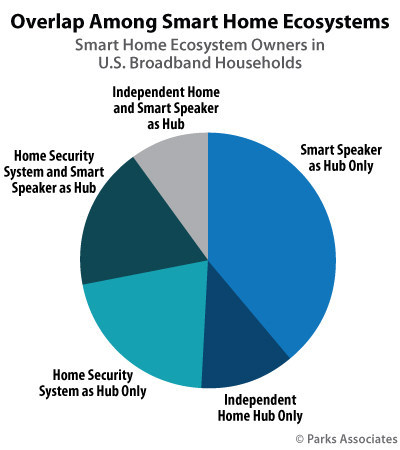 “The majority of smart home owners still operate their products as stand-alone devices, but the rise of voice control, paired with the growth in number of connected devices in the home, has helped push more households toward centralized control,” said Dina Abdelrazik, Research Analyst, Parks Associates. “U.S. broadband households now have more than 10 connected devices on average, and the growing number in consumers’ lives intensifies the complexity in the smart home. Voice has emerged as a key interface to alleviate this complexity.”

Voice platforms are important among smart home device owners who are planning to buy more devices in the next 12 months. ‘360 Deep Dive: Smart Home Ecosystems: Driving the Smart Home Forward’ finds that only about one-third of all smart home intenders plan to use a voice method to control the devices they buy, but among households that already have devices and a hub, a substantial portion plan to use voice as a primary method of controlling their planned purchases.

“A smartphone app may be sufficient for houses with just one device, but when people get their fourth or fifth product, using individual apps for each device creates friction for the end user. A hub or centralized unit of control becomes more and more appealing,” Abdelrazik said. “Competing protocols and fragmentation continue to inhibit smart home adoption, but end users who have already adopted smart home solutions see voice as a convenient means of controlling their growing network of products.”

‘360 Deep Dive: Smart Home Ecosystems: Driving the Smart Home Forward’ offers insight into which households value which hub types as well as how they use them in order for industry players to improve user interfaces and develop strategies for compatibility across smart home devices.