This year, 182.5 million people in the US will view content via subscription over-the-top (OTT) services, representing 55.3% of the population. While Netflix remains the most popular subscription service, rivals like Hulu and Amazon Prime Video are stealing share, according to our latest OTT forecast. 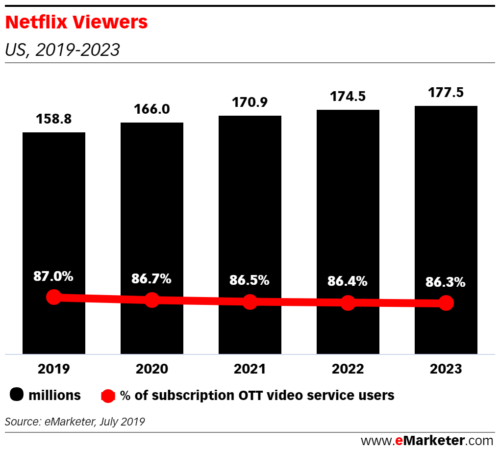 Netflix is the most popular subscription OTT service in the US, with 158.8 million viewers in 2019. Despite the company missing subscriber growth expectations in Q2, we project it will experience strong growth for the remainder of the year, up 7.6% from 2018. This will be driven by the platform’s strong slate of original content, including the new seasons of “Stranger Things,” “The Irishman” and “Orange Is the New Black.”

Even as it grows, Netflix’s share of US OTT subscription users will continue dropping. In 2014, it captured 90.0% of the market. This year, its share will be 87.0%, as smaller rivals lead to the decline of its dominance.

“Netflix has faced years of strong competition for viewers, coming from streaming video platforms, pay TV services and even video games,” said eMarketer forecasting analyst Eric Haggstrom. “While there is no true ‘Netflix killer’ on the market, Disney’s upcoming bundle with Disney+, Hulu and ESPN+ probably comes closest. Netflix’s answer has been to stick to what has made it the market leader—outspending the competition on both licensed and original content, offering customers a competitive price.” 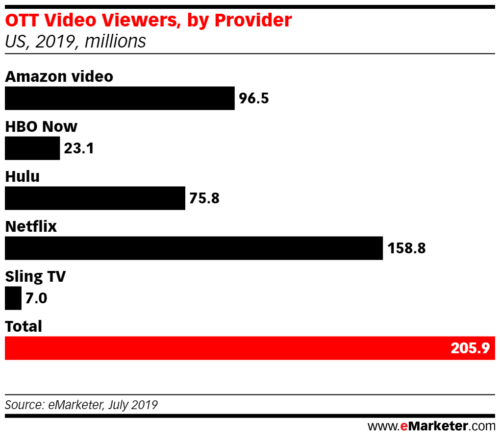 While Netflix is losing share, Hulu is gaining. In the US this year, we estimate Hulu will reach 75.8 million viewers, accounting for 41.5% of subscription OTT video service users. The number of individual viewers will grow by 17.5% in 2019. However, that rate is down significantly from the company’s 49.6% growth spurt in 2018.

In 2019, Amazon Prime Video will remain the second-largest subscription OTT provider by viewers in the US (52.9% penetration). In total, Amazon will have 96.5 million viewers, which is 8.8% higher than in 2018. By 2021, the number of Amazon Prime Video viewers will reach one-third of the US population.

“The market for streaming video has been driven by an explosion in high-end original content and low subscription costs relative to traditional pay TV,” Haggstrom said. “A strong consumer appetite for new shows and movies has driven viewer growth for services like Netflix, Hulu and Amazon Prime Video, as well as the broader market.”