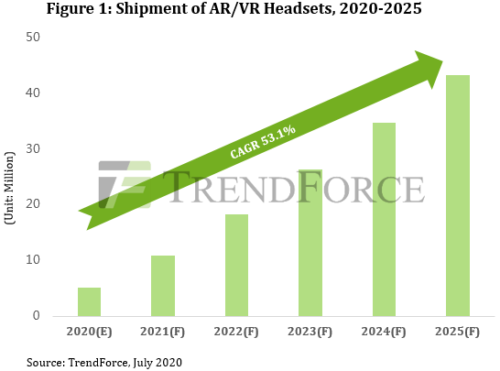 TrendForce analyst Jason Tsai indicates that the accelerating growth of the AR/VR devices market can be attributed to aggressive product strategies from branded manufacturers. In particular, glasses-like AR/VR devices are projected to become a popular choice with which companies will expand their presence in the consumer electronics market. An increasing number of brands are expected to release new products between 2021 and 2022. For instance, Apple, Huawei, and Samsung, among other companies, may release glasses-like AR/VR devices and in turn expand the market even further.

Jason Tsai also states that, given the consumer electronics market’s high demand on product appearances and retail prices, AR/VR devices are manufactured with lightweight optical designs, in addition to having their computing units and batteries kept in separate housings, allowing the devices to resemble normal eyeglasses in terms of product appearance. If AR/VR devices are designed to receive computing ability, power, network connectivity, or even apps from an external connection to smartphones, then these devices will be marketed as smartphone peripherals, much like smart watches, smart bracelets, and TWS Bluetooth headsets, in terms of product positioning. As a result, smartphone brands are likely to make a proactive effort in developing related products while driving the market forward.

Furthermore, these glasses-like, consumer AR/VR devices contain only several key components, including optical components, projectors (which serve as their light source), and optical engines. To keep a diminutive size, the projectors used in these devices are mostly small-sized LCD or Si-OLED displays. For instance, AR glasses mostly employ a birdbath optical design, which projects light from a Si-OLED display source mounted on the top or side of the glasses. The adoption of Si-OLED displays has encouraged BOE and Seeya Technology to enter the industry and compete with existing Si-OLED suppliers Sony, Epson, and Kopin, demonstrating a wave of optimism in the AR/VR market.

TrendForce believes the AR/VR market will see rapid expansion in 2021 and 2022 as various brands begin participating in AR/VR development, which will also lead to the development of related key components, such as optical components and Si-OLED displays.