2020 turned out to be a year of new records for the streaming services in Sweden. More people than ever are paying for video streaming services, while viewing reaches new top levels. Mediavision’s analysis of 2020 shows that the pandemic has had substantial effects on the state of the Swedish streaming market and by that accelerated the digital transformation. 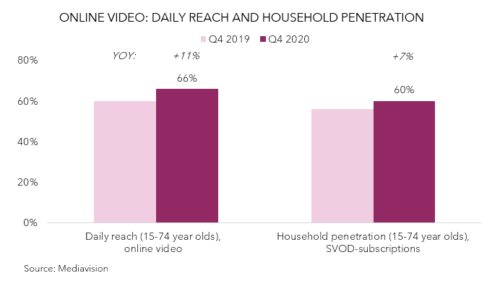 The first quarter of 2020 was characterized by a slowdown in growth on the streaming market, both in terms of subscriptions and viewing. However, when closing 2020, the final result is substantial growth. Restrictions following the pandemic appears to have had a clear and positive impact on interest for video services in general. 2020 holds several new records and a continued strong transformation of the media market.

For example, viewing reached a new high during the final, fourth, quarter of 2020. Close to 70% watched online video an average day. This constitutes an increase of more than 10% compared to the same period 2019. By the end of the year, just over 2.6 million households paid for at least one subscription to a video streaming service. This also reveals a strong growth, resulting in online video and traditional pay-TV being equally large in terms of paying households. The consumer migration to online in Sweden has been evident since the second quarter.

The increased interest in video is also reflected in spend. Today, households in Sweden spend more on online video than ever before. On average, a Swedish household spends (including both paying and non-paying) approximately 120 SEK per month for services from Netflix, Viaplay, Cmore etc.

“2020 was, to say the least, an eventful year. We have seen strong growth for video and more people than ever are consuming video online,” says Marie Nilsson, CEO of Mediavision. “We can also conclude that interest for online video has grown among older people. They now adhere to streaming services like Netflix, Viaplay and Cmore to much greater extent than before. On top of that, more households than ever are paying for online video services and for a larger number of services. The number of services offered to households in Sweden has never been greater, implying an even more intensified battle over the consumers in 2021.”