Figure A. The following image illustrates the UI before and after the implementation of Image Distillery™ on Telenet TV. In the ‘after’ case, the channel’s logo has been added to the UI after removing the show’s logo in order to prevent a ‘logo-conflict’. 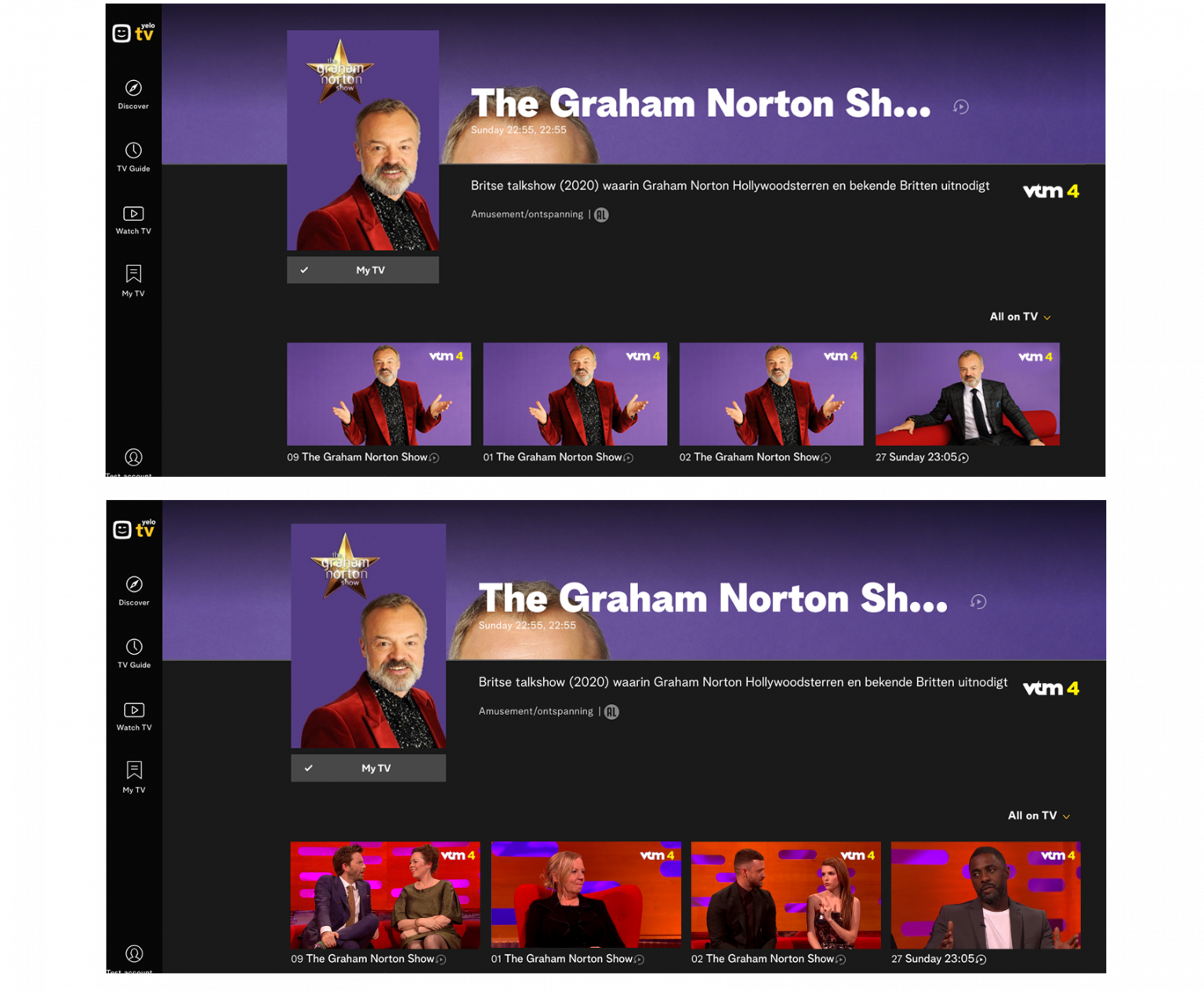 This image illustrates the UI before and after implementation of Image Distillery™ on Telenet TV. In the ‘after’ case, the channel’s logo has been added to the UI after removing the show’s logo in order to prevent ‘logo-conflict’. Telenet has implemented the Image Distillery™ solution to improve the TV browsing and content discovery experience for its 1.8 million cable TV subscribers. The technology is now live, as part of a new multi-year agreement with Media Distillery, and is enhancing UX across 20 full-time (24-hour) channels. Image Distillery uses AI to dynamically and automatically generate 3,000 appealing and informative still images every day for Telenet, representing any broadcast TV programme, for display within the service’s UI. High-quality, attractive representational UI imagery leads to better subscriber engagement and satisfaction.

The system captures images from any live broadcast feed, processes and optimises them, and creates well-composed screenshots that depict each programme in the most visually attractive way possible.

Scalability and nimbleness are major benefits of Image Distillery. There is no limit to the quantity of images that can be generated, and they are created in real-time, while the programme is still running.

For each show, the AI-enabled Image Distillery solution captures several candidate images, and automatically strips out blank spaces as well as subtitles and graphics which might interfere with onscreen channel logos. It then resizes and crops the stills to create images likely to appeal to the viewer, with eye-catching and informative representations which illustrate the programme, episode by episode.

The system evaluates and ranks the candidate images for each show based on pre-set quality criteria; it then automatically selects the best one and the operator can immediately utilise it in the UI, even during the show’s transmission. The solution ensures the image chosen to be displayed in the UI is crisp and blur-free, that the actors’/presenters’ eyes are open, and the characters’ positioning in-frame is aesthetically pleasing.

“We have such a depth of linear channels, there is great disparity among them as regards the variety of images we have at our disposal to use in our EPG,” explains Ivor Micallef, Director of Entertainment Products at Telenet. “While some of the bigger broadcasters dedicate a lot of editorial effort into curating their visuals and programme information, not all do, and this can be especially hard for some of the smaller broadcasters,” he explains.

Without access to captivating and appealing still images for all their content, the operator might be forced to populate the UI with multiple repetitive and unenlightening stock images. This not only makes the user interface much less attractive, it also makes it far less useful for the viewer as there is no visual way of discerning one instalment of a series from any another.

“We know both anecdotally and intuitively that subscribers can get annoyed when presented with an image of a programme which lacks any information or representation of a particular episode,” explained Micallef. “Users today are accustomed to the world of apps and streaming, where content is attractively visualised; so we wanted to find a way to populate our browsing experience with more visual content, and to do so in an attractive, smart and efficient way,” he added.

But the rationale behind ensuring good visual representation in a UI goes far beyond mitigating viewers’ irritation. The report “TV Universe – UK, Germany, Sweden: HOW PEOPLE WATCH TELEVISION TODAY” from nScreenmedia (2019) shows that graphics in TV show and movie guide listings are a critical influencer in helping people decide what to watch. In all three countries, more than 3 in 5 stated that guide graphics are an important influence on their viewing choice. Notably, over 4 in 5 18- to 24-year-olds said they were persuaded by graphics.

“What this shows is that the attractiveness of visual representation or promotion of a TV show or film can have a direct impact on whether the viewer decides to watch, or if he or she simply passes it by, particularly for younger consumers. This in turn can potentially affect ratings, and ultimately the service provider’s NPS,” comments Colin Dixon, Founder and Chief Analyst of respected TV research firm nScreenMedia.

This is not the first Media Distillery deployment for Telenet. In 2018, Telenet deployed EPG Correction™ from Media Distillery. EPG Correction makes automatic replay start-time adjustments to exactly align with actual start and end times of TV programmes as they are broadcast. As a result, users can navigate programmes more accurately, and enjoy a harmonious viewing experience, without having to watch pre-show ads or suffering their desired content being cut off.

“Media Distillery has proven a great partner for Telenet; we recognise the ongoing value of our collaboration as our roadmap has evolved,” said Telenet’s Micallef. “We operate in a competitive market, and by deploying Image Distillery, we are further enhancing our UX with yet another powerful way to fortify our relationships with subscribers,” he added.

Figure B. The following images briefly illustrate how our Image Distillery™ solution operates:
1. Selection of a diversified set of images belonging to the program (with blur, ads, closed eyes, text, bad compositions)
2. Quality assessment: Extraction of the best image overall
3. Identification and elimination of noise on the frame (cropping out unwanted elements.

These images briefly illustrate how Image Distillery™ works: 1. Selection of a diversified set of images belonging to the programme (with blur, ads, closed eyes, text, bad compositions) 2. Quality assessment: Extraction of the best image overall 3. Identification and elimination of noise on the frame (cropping out unwanted elements) With Image Distillery, the broadcaster or service provider can specify a timeframe within each programme from which the images are to be generated. For example, the system can be instructed to only harvest images from the first 15 minutes of a show. This therefore would prevent the EPG from inadvertently displaying a ‘spoiler’.

Unlike other TV and movie imagery solutions in the marketplace, Media Distillery’s Image Distillery solution is fully automated, with no need for manual editorial intervention or processing. As a result, impactful images which meet all the right pre-defined criteria are produced rapidly with a high degree of resource efficiency, consistency and quality.

“We are extremely proud that Telenet continues to rely on Media Distillery technology with its deployment of Image Distillery,” says Roland Sars, CEO of Media Distillery. “Since we began working with the company back in 2018, Telenet has demonstrated an abiding forward-thinking philosophy, and a willingness to embrace new technology in order to continuously deliver a better user experience to its subscribers.”

The award-winning Media Distillery system uses Deep Content Understanding™ to identify and label features in audiovisual media automatically, enabling TV service providers to enhance the presentation of programmes and deliver a better viewing experience that meets the expectations of viewers.