Continued price hikes of TV panels, as well as a simultaneous shortage and price hike of semiconductor components required for manufacturing TV sets have forced TV brands in 2021 to reduce the shipment of their mid- and small-sized TVs in favor of the more profitable large-sized, mid- to high-end TVs instead, according to TrendForce’s latest investigations. 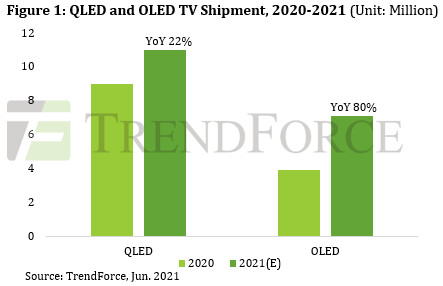 It should be pointed out that, as increased vaccinations in Europe and the US bring about an imminent easing of border restrictions, TV demand generated by the stay-at-home economy is likely to slow down.

In addition, TV panel costs have remained sky-high and shown no signs of downward movement. Hence, TV brands are moving towards larger product sizes and better specifications in order to maximize profits and minimize the financial losses incurred by selling mid- and small-sized TVs, which have relatively low margins. Given the downscaling of these less profitable models, TV brands’ annual shipments will likely suffer a corresponding drop. TrendForce therefore expects total TV shipment this year to reach 220 million units, a 1.4% YoY increase.

There has been a sharp drop in the profitability of mid- to small-sized TVs this year. In response, during the replacement period between old and new models, market leader Samsung Electronics has not only lowered the retail prices of its QLED products to attract consumers, but also released its new Neo QLED lineup, which features Mini LED backlights and resolutions ranging from UHD to 8K.

Samsung’s QLED TV shipment is expected to undergo a 17% YoY increase to 9.1 million units this year, the highest annual shipment in history. In particular, Samsung’s lineup includes about 1.5 million Mini LED backlight TVs, mostly with 65-inch and 55-inch displays, and these sizes account for 33% and 30% of the company’s total Mini LED backlight TV shipment, respectively, while the ultra-large, 75-inch model will account for 17%.

Apart from the aforementioned two brands, Xiaomi and LG are also eager to enter the Mini LED backlight TV market.

While brands expand their production lines for OLED TVs, LG and Sony are expected to seize nearly 80% of OLED market share

At the moment, OLED TVs have been attracting consumer attention in the high-end TV market primarily due to their excellent image quality through high color saturation and contrast.

As LG Display installs additional OLED capacity via its Gen 8.5 production line in Guangzhou this year, there will likely be a corresponding increase in OLED TV supply as well as a diversification of OLED TV sizes.

Also, annual OLED TV shipment is expected to break records once again this year, as brands are willing to expand their OLED TV product lineups because strategic reductions in OLED panel costs have now significantly narrowed the gap between the cost of OLED panels and that of equivalent LCD panels, thereby giving OLED panels a cost advantage that allows TV brands to reap increased profitability.