AR to see 22-fold revenue growth by 2030 while AR-based devices set to one day replace the smartphone, says GlobalData

There is no doubt that augmented reality (AR) has become a popular tool for entertainment – whether its helping gamers see their favorite Pokémon wandering around their local neighbourhood or having a good laugh seeing yourself sporting dog ears using facial recognition software. However, AR is expected to take the reins and go from these humble beginnings to one day replacing smartphones, according to GlobalData. The leading data and analytics company notes that within the next ten years, AR will be a $152bn industry – a whopping 22-fold growth. With metaverse megatheme looming and the tech’s part to play in the future of work, AR will be one of the most disruptive technologies of our time. 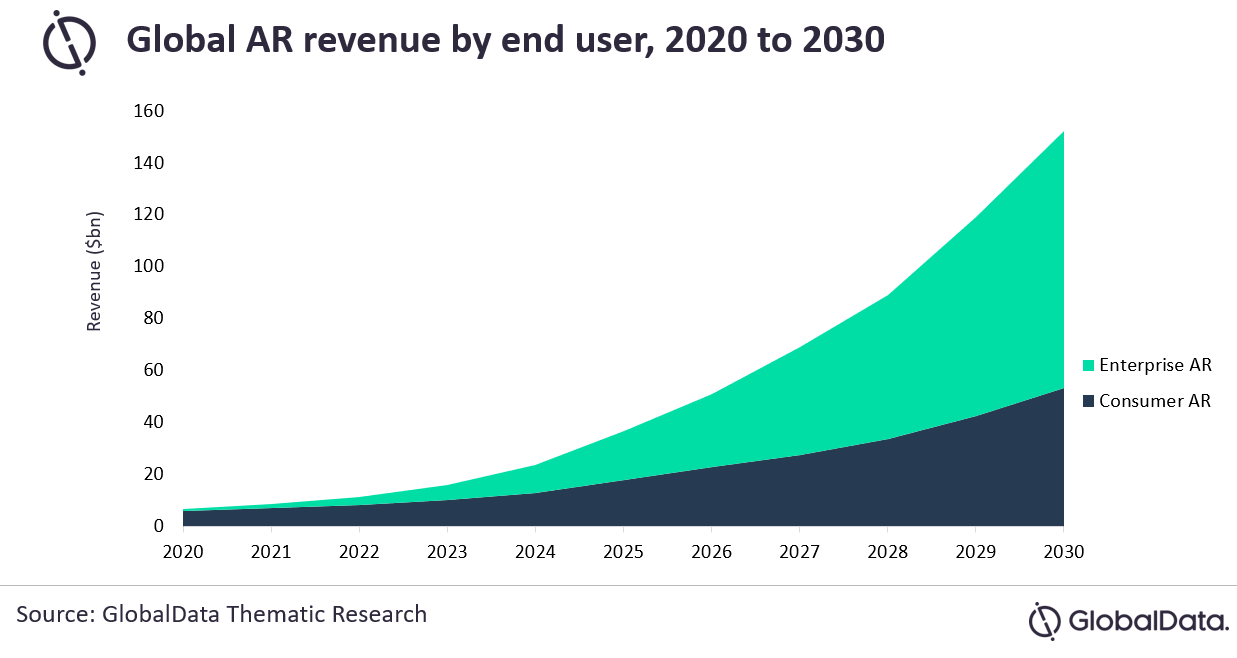 Rupantar Guha, Associate Project Manager for the Thematic Team at GlobalData, comments: “Imagine wearing a pair of glasses with the computing power of a smartphone. It is activated by your voice and recognizes what you see, where you are, and the context in which you are operating. Such a device can replace the smartphone as the primary connected device users carry around, but that is some years away from reality. Clearly, the threat to the smartphone market is not imminent. Indeed, smartphones are currently used to support AR applications in both the consumer and enterprise markets. However, first-mover advantage in AR is such a valuable prize that every large technology company is investing significantly in this theme.”

GlobalData’s latest thematic report, ‘Thematic Research: Augmented Reality’, reveals that the global AR market was worth $7bn in 2020 and will expand at an impressive compound annual growth rate (CAGR) of 36% over the next ten years.

Guha continues: “AR is evolving into a utility in specific consumer and enterprise applications. On the consumer front, AR is primarily used in social media, gaming and ecommerce. While Pokémon Go and Snapchat Lenses have helped popularize AR as a tool for entertainment, ecommerce is using it as a utility.

“AR is still developing as a technology but it is beginning to move into the mainstream. It will be a critical component of the metaverse – the next mega-theme that big tech has in its sights. Upcoming metaverse platforms will integrate AR-related technologies, helping to bring AR to the fore.”

In GlobalData’s Emerging Technology Sentiment Analysis, Q2 2021, conducted in Q2 2021, respondents perceived AR as the most disruptive technology, ahead of artificial intelligence.

Guha adds: “AR will be a key technology in the future of work. COVID-19 has fueled enterprise adoption of AR across sectors such as healthcare, law enforcement, and manufacturing – mainly for remote collaboration. Businesses will continue to adopt AR in the coming years, but the high cost of headsets and smart glasses will be a barrier to widespread adoption in the short term. However, by 2030, enterprises will account for the largest share of the AR market by revenue.”

*GlobalData defines augmented reality as a technology that allows the user to see the real world overlaid with digital data.