A new Guardian-branded FAST channel (Free Ad Supported Television) launches today on one of Europe’s leading VOD platforms Rakuten TV, giving audiences in the UK and across Europe the opportunity to enjoy a range of Guardian documentaries and video journalism content, as part of a new partnership. The deal marks the first time the Guardian’s award-winning documentaries and videos will appear on a scheduled, linear channel as part of the Guardian’s global digital network. 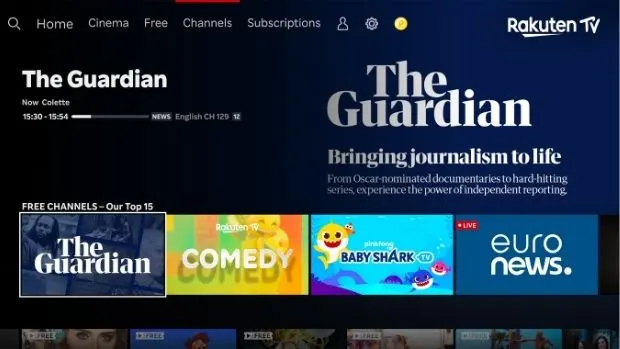 From an Oscar-winning short film and a BAFTA-nominated documentary to hard-hitting original series, the Guardian will bring its world-class video journalism to life on Rakuten TV.

The Guardian FAST channel will be available in the 43 countries where Rakuten TV is distributed, reaching more than 110 millions households via its branded remote-control button and pre-installed app on select Samsung, LG and Vestel Smart TV devices, among others, as well as on Samsung’s own FAST TV service Samsung TV Plus in select countries.

Robert Hahn, director of business affairs & platform partnerships, Guardian News & Media says: “At the Guardian, we have always sought to make our journalism available to people around the world. Through this new agreement with Rakuten TV, we hope to broaden the distribution of Guardian content even further and make a selection of our brilliant video series and documentaries even more discoverable.”

Cedric Dufour, Rakuten TV CEO, says: “The addition of the Guardian to our linear channels bouquet further demonstrate our commitment in expanding the platform’s free offer with top tier content and brands, opening up new opportunities for our users as well as for advertisers to get in front of the Guardian audiences”.

Christian Bennett, executive editor for visual journalism, Guardian News & Media, adds: “We are proud of our reputation for award-winning video journalism and powerful storytelling, and are excited to share a selection of our best Guardian series and films with Rakuten TV’s audiences across the UK and Europe.”

The Guardian’s reputation for world-class video journalism has grown substantially in the past few years, receiving awards and critical acclaim around the world, including an Oscar.

The addition of The Guardian channel to the Rakuten TV portfolio continues to build on the platform’s ongoing strategy to strengthen its offer of free, ad-supported premium content in partnership with leading European content creators. Rakuten TV sits within Rakuten Advertising’s unified portfolio, where advertisers can buy media across a variety of channels. Drawing on first-party data and extensive audience insights, Rakuten Advertising and Rakuten TV offer brands unique discoverability, combining the targeting and tracking capabilities of digital formats with the advantages of TV.

The Guardian-branded FAST channel is available on Rakuten TV from today (Thursday 10 March) in the UK and Europe.