DALLAS — Ahead of NAB next week, Parks Associates announced the latest update of its Consumer Insights Dashboard, an ongoing service that tracks adoption of consumer electronic devices and services through its quarterly surveys of 10,000 US internet households. The firm’s Consumer Electronics Dashboard, published biannually, reveals that out of the top five brands, Sony showed clear growth among smart TVs purchased or received in previous six months, compared to 2020, which pushed this brand past Vizio and into the top three for reported purchases in Q3 2021. 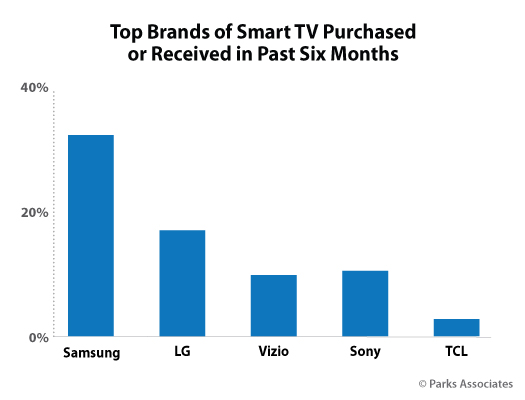 “Samsung continues to lead smart TV adoption, and it currently comprises over one-fourth of all consumers’ primary smart TVs in the US,” said Paul Erickson, Director, Research, Parks Associates. “While smart-TV adoption is at all-time highs, there may be short-term saturation and conservatism in effect while consumer smart-TV purchasing settles following dramatic increases in 2020. Sony still managed to grow in purchasing – despite downturns for the traditional top three brands – which may be related to its first-mover release of new Google TV Bravia models over 2021.”

“This is notable given that the aggregate trend across categories has been a very gradual decline in overall usage since 2017,” Erickson said. “Smart TVs have become the most-important media centerpiece for the home, and their prominence offers the industry numerous integration opportunities for smart home and connected health ecosystems.”

Parks Associates is attending NAB next week and will host the Future of Video session “OTT Churn: Marketing and Retention Strategies” on May 5. The Future of Video session will examine the role of the smart TV in driving consumption and subscriptions for video services as well as strategies to keep viewers engaged, featuring executives from Bitmovin, Firstlight Media, Metrological, and NBCUniversal.