BETHESDA, MD — According to DITTBERNER’s “DSL, FTTH and FTTB/LAN Shipment Analysis”, annual FTTH shipments were up 71 % in 2008. 4Q08 shipments rose slightly, but still broke 3 M for the first time. Although a big jump, this increase was lower than the 80% increase forecasted by Dittberner in January 2008. Slower growth than projected for Europe and Korea is the main reason, offset by a higher than expected growth in China. 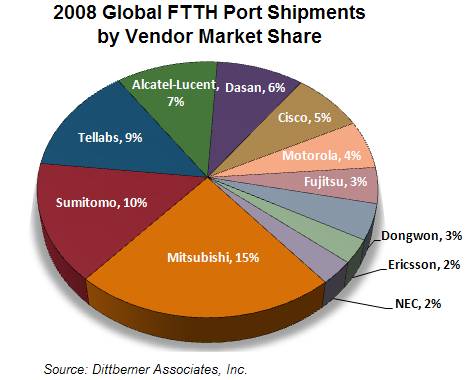 The Japanese market remains the main driver for FTTH, adding a little over 700,000 subscribers in the fourth quarter to close in on 14.5 Million FTTH and FTTB subscribers. The North American, Korean and China markets showed steady growth.

The market share by vendor fractured more this year, as the Japanese market became less dominant. European, American, Chinese and Korean vendors claimed a significant market share. Mitsubishi remains the market leader in ports shipped, while Sumitomo remained in second place for the year. Chinese vendors appeared for the first time in 2008 and their market share is expected to grow, but will not necessarily become dominant, as China is deploying more FTTB than FTTH.

The mix of technologies continues to shift, with GPON overtaking BPON and P2P Ethernet moving into second place behind GePON. GePON share should increase again now that China has chosen it for FTTH/FTTB deployments.

Dittberner expects that the FTTH shipment jump in 2008 will be followed by 5% growth in 2009 and then growth will be flat for 2010 and 2011. FTTH shipments will climb slowly after that. FTTB shipments are expected to grow much more quickly over the next decade because it is a much more cost-effective means of providing broadband services. By 2018, Dittberner expects that FTTB shipments will be the leading fixed broadband technology.