After more than a dozen years of failing to live up to its promise, web access on the television is finally ready for prime time, with retail sales of Internet-Enabled Televisions (IETVs) set to rise by a factor of six by 2013, according to iSuppli Corp. 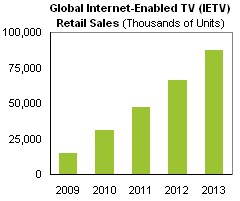 iSuppli defines an IETV as a set that has the capability to connect to the Internet either with a wired link or wirelessly, and provides sufficient system resources to support thin-client applications such as Yahoo Connected TV widgets or the Adobe Flash Platform for the Digital Home.

“With the flat-panel television market being driven by declining prices, brands are looking at ways to differentiate their TV lines from the competition,” said Randy Lawson, senior analyst for DTV and display electronics for iSuppli. “Adding new features helps not only with differentiation but also increases the possibility of charging a premium for a step-up model. While television brands in recent years have focused on features like faster refresh rates, LED backlighting, improved dark levels and power savings, Internet connectivity now is emerging as new key feature.”

Beyond the differentiation factor, the addition of Internet capabilities to television sets by leading TV OEMs represents a unique opportunity for these companies to finally have direct access, and thus additional potential revenue channels, to their end customers.

On the consumer side, iSuppli believes that IETV will emerge as one of the key features that consumers will demand in the coming years. With strong interest among both television buyers and sellers, IETVs are entering the market in droves. Already in 2009, iSuppli counts more than 85 IETV models being offered at retail in the United States alone.

The start of the IETV boom comes 12 years after Microsoft Corp. rocked the technology world with its purchase of WebTV Networks. WebTV, now called MSN TV, promised to bring Internet access to the massive installed base of televisions.

“WebTV has been a product and service that never quite lived up to its hype,” Lawson said. “Because of this some might be wondering if IETV is simply a case of déjÃ  vu all over again. However, there are significant differences between the technology landscape of the mid-90s and the state-of-the-art Digital TVs (DTV), modems and broadband services of 2009.”

One major difference is the fact that VDSL and fiber-to-the-home increasingly are being adopted by consumers, offering download speeds of 30Mbit/sec. and faster–three orders of magnitude faster than the V.34 modem speeds supported by the first-generation WebTV unit. When coupled with the deployment of more mature video-encoding algorithms such as H.264, the age of Internet-sourced video is definitely upon us.

Another change involves the increasing prevalence of flat-panel televisions, in contrast to the CRT sets that were universal during the mid-1990s. Finally, the arrival of Internet-based video services has changed the way viewers access entertainment.

“A whole new world has opened up for consumers with the arrival of flat-panel televisions, their digital capabilities and increasing amounts of digital content served from non-traditional sources such as Vudu, Roku and TiVo, as well as Video-on-Demand (VoD) services. This is a dramatic difference from 10 years ago, when television was a mode of entertainment that was primarily available through either broadcast cable or a satellite service provider–or from rented videos.”

From a semiconductor perspective, IETV offers a new growth area in the midst of still positive–yet slowing–revenue expansion opportunities in the television space. From 2001 to 2006, the DTV semiconductor market was an area of key investor interest due to the increasing share of TVs enabled with a digital tuner/decoder.

Interest intensified as the display industry shifted rapidly away from CRT and toward flat-panel plasma and LCD technologies, and away from Standard Definition (SD) to High Definition (HD) models. However, during the past three years, as retail and panel prices have eroded due to a combination resulting from the breakneck pace of technology development and the cutthroat OEM price wars in the TV retail arena, the growth potential for semiconductor revenue has dwindled to the sub-10 percent five-year Compound Annual Growth Rate (CAGR) range.

IETV requires more system memory, the use of advanced decoder ICs with higher power CPUs–or multiple CPUs–and the inclusion of network interface capabilities, yielding strong growth potential for semiconductor suppliers. The only television semiconductor segment with stronger growth potential will be LED backlights for LCD-TVs. iSuppli expects to see strong growth in the annual revenues for the IETV-required, multi-format, decoder-enabled video processor from 2009 through 2013.