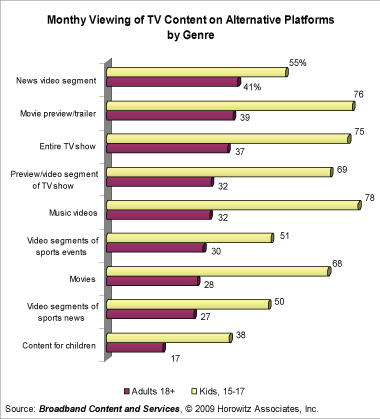 While incidence and sampling of alternative TV platforms has apparently reached mass market proportions, the actual percent of TV content consumed on alternative platforms remains small. According to the Horowitz study, of all the hours Internet users say they spend watching TV programs, about 4% of TV time is on a platform other than a TV set — 2% on a PC/laptop and 2% on a handheld — with the vast majority (96%) still consumed via the traditional television platform.

“It’s important to keep in perspective that when all is said and done, consumers are still spending only a very small amount of their total TV time on alternative platforms,” notes Adriana Waterston, VP of Marketing for the research firm. “But, we anticipate that multiplatform TV viewing will continue to grow — especially among young people — as the technology improves towards a more authentic and convenient TV experience, and with programmers and aggregators actively promoting themselves on these platforms.”