SANTA CLARA, CALIF. — While the consumer electronics industry prepares its wares for the CES in Las Vegas, the foundations of a quiet revolution in TV viewing continue to be built, with 21% of all TVs shipped in 2010 forecast to have internet connectivity. According to the DisplaySearch Q4’10 Quarterly TV Design and Features Report, the category is forecast to grow to over 122 million in 2014.

Growth of connected TVs was fueled by the Japanese market in 2010 with strong market growth driven by the Eco Points system, and very high penetration of connected TVs, driven by domestic brands’ strategies and by high levels of broadband access. Emerging markets will play a key role in the future growth of this segment, with Eastern Europe forecast to grow from 2.5 million connected TVs shipped in 2010 to over 10 million in 2014. DisplaySearch findings also suggest that 12% of flat panel TVs sold in China in 2010 will have internet capability. 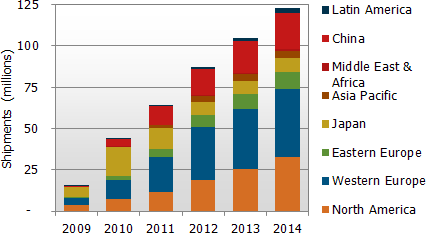 “The looming risk now is what happens if every connected TV gets used,” said Paul Gray, Director of European TV Research. “With Netflix accounting for 20% of peak internet traffic in the US, it’s reasonable to ask if the infrastructure can cope. Set makers need to understand that broadband access does not scale endlessly like broadcast reception.”

It is expected that the connected TV market will diverge, with basic sets carrying enhanced broadcast services such as Hbb.TV and YouView, while the Smart TV segment will enjoy configurable applications, sophisticated search and navigation engines, and advanced user interfaces.

While there is no accepted definition for Smart TV, most have a few key features:

Smart TVs are not limited to a specific operating system, and Linux (MeeGo) and Android (Google TV) platforms will be joined by others. Google is working with Sony Corp. and Logitech for the launch of Google TV, but expect many more entrants in 2011.

“Current shipment levels combined with consumer feedback suggests that Google TV is not yet the Smart TV of people’s dreams,” Gray added. “While adding internet capabilities into the TV is powerful, it needs to be as effortless as channel surfing. However, Google TV has given a good lead into what works.”

The DisplaySearch Quarterly TV Design and Features Report is a quarterly update of the issues and rapid shifts in feature development in TV sets. The 200+ page report examines and forecasts video processor and signal processing IC market development including 120/100 and 200/240 Hz frame rates and market shares for major IC vendors. In addition, the report also features forecasting for MPEG-4 decoding and the digital broadcast environment around the world, including a forecast for DVB-T2; TV connectivity, such as wired and wireless networked TVs; LED backlighting; 3D capability and implementation; remote controls and chassis design; and power consumption.