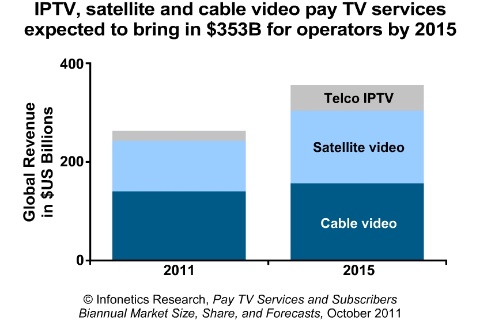 “In 2008, cable video made up 59% of the global pay TV market, satellite video brought in 38% and IPTV was just a drop in the bucket. Now cable operators are being challenged not only by attractive pricing and services from IPTV and satellite operators, but by all over-the-top (OTT) video services, like Netflix and Amazon On-Demand, and by connected-TV devices, which are prompting consumers to cut the cord. Net new cable video subscribers continue to decline in North America and EMEA, and the small increases in Asia and Central and Latin America aren’t offsetting those declines. While we don’t expect OTT to have a significant impact on pay TV subscribers because operators are responding to OTT with their own enhanced delivery offerings, we do expect cable video’s share of pay TV revenue to decline as satellite video increases — nearly catching up to cable by 2015 — while IPTV services grow to 15% of the market,” notes Jeff Heynen, directing analyst for broadband access and video at Infonetics Research.