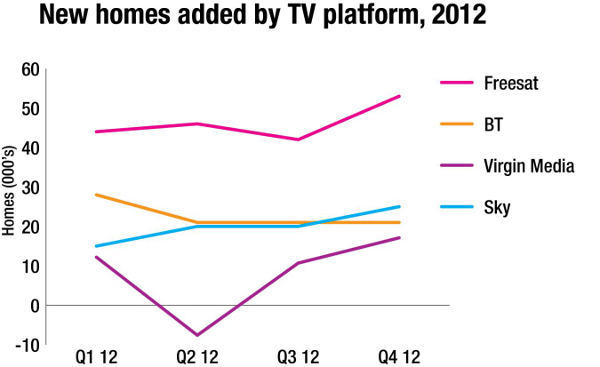 According to Freesat’s own customer research*, 51% of homes that joined the free TV service in 2012/13 were from Pay-TV rivals. The research also indicated that just over 25% of homes are considering changing TV service provider in 2013, and of these, 60% are being driven by the desire to save money.

Emma Scott, Freesat’s Managing Director commented: “Freesat is truly a TV platform of choice. Our consistently positive results demonstrate fantastic growth and a strong appetite for high quality, good value TV, in a challenging economic environment. The success of our

“Everyone of us across the UK is continually reassessing how we spend our money, and with 79% of viewing across all platforms, including pay, going to free channels, and 52% going to the top 5 channels – having a monthly TV subscription just doesn’t make sense for most people.”

* Data taken from Freesat research, conducted by YouGov in April 2013, Freesat estimates that it is in 1.7m homes; for comparison, research firm 3 Reasons estimates that Freesat is in 1.6m homes.