Global TV advertising expenditure will reach $219 billion in 2018 for the 55 countries covered in the TV Advertising Forecasts report from Digital TV Research, up by 32% – or $53 billion – from 2012.

TV advertising spend grew by 4.4% in 2012 to $167 billion, but only 2.8% growth is forecast for 2013 as the recession bites again in several European territories. The much-touted quadrennial effect took place in 2012 (and will also occur in 2016) whereby the advertising industry is boosted by the US Presidential elections, the summer Olympics in London and the Euro soccer championships in Poland and the Ukraine. 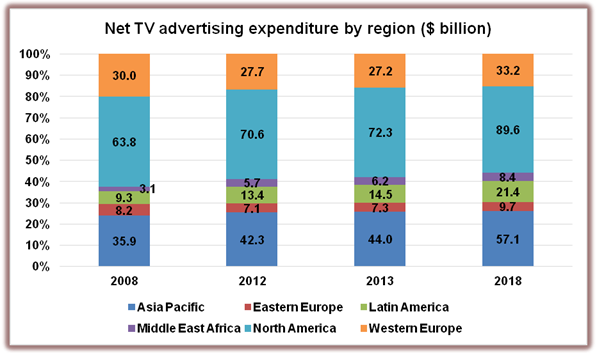 2009 was a terrible year for the advertising industry. Although a rebound was recorded in 2010, many countries dipped again in 2011, improved in 2012 and several are likely to decline again in 2013.

TV advertising expenditure will more than double in Latin America between 2008 and 2018, due to the buoyant economies, Brazil hosting both the Olympics and the soccer World Cup, but also because of high inflation in some countries, such as Argentina.
However, TV advertising spend in Western Europe will only be 11% higher in 2018 than in the pre-recession year of 2008. Excluding the booming Russian market, TV advertising in Eastern Europe will still be lower in 2018 than the 2008 total.

Although there will be some improvement in most countries in 2013, TV advertising expenditure is forecast to fall for 19 (mostly European) of the 55 countries covered in the report in 2013. However, 2014 (and onwards) will be better, with only Croatia and the Czech Republic declining in 2014.

From the $52.6 billion TV ad spend to be added between 2012 and 2018, $18.2 billion will come from the US, followed by an extra $5.6 billion from China, $4.6 billion from Brazil and $3.7 billion from Japan. However, Argentina, Brazil and Indonesia will record the fastest growth over the same period.