MONTEREY, Calif. — Spending on movies and TV shows in the home entertainment market eked out 1 percent growth in 2013, the second straight year of increase after declining at a 3 percent compound annual rate from the market peak in 2004 through 2011, according to preliminary estimates of the U.S. market from IHS Technology (NYSE: IHS).

Modest growth in pay-TV video on demand, and strong increases in Internet sales, rentals and subscriptions, drove the two-year gain in home entertainment revenue from $17.6 billion in 2011 to $18.3 billion in 2013. In 2013, pay-TV revenue grew by 1 percent, while Internet sales increased by 39 percent, rentals rose by 40 percent and subscriptions expanded by 31 percent. That is the second straight year of 30 percent-plus growth rates for the digital home entertainment categories that now make up more than one-third of the market.

However, the critical factor is that spending on physical discs at rental and retail is not declining as fast as it was during and immediately after the recession of 2007-09. Total U.S. consumer spending on purchases and rentals of movies and television shows on disc dropped to $11.7 billion in 2013, down from $12.9 billion in 2012, based on data from the IHS U.S. Video Intelligence service. This represents the ninth consecutive year of decline for the U.S. home video market, but at single-digit rates for the second year in a row rather than the double-digit drops seen as recently as 2011. 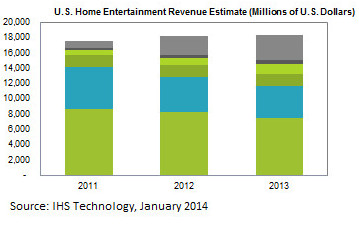 The figure presents the IHS preliminary estimate of U.S. home entertainment revenue from the sales and rentals of movies and television shows on disc, pay-TV video on demand, and Internet sales, rentals and subscriptions.

“While 2013 was another record year for the theatrical box office, that didn’t translate into an increase in disc sales and rentals, given the ticket returns and resulting video success of last year’s hits including ‘The Avengers’ and ‘The Hunger Games,’” said Michael Arrington, senior analyst, U.S. video, for IHS Inc. “While many factors have contributed to the nearly decade-long fall in U.S. consumer video disc spending since the market peaked at $21.9 billion in 2004, one long-term issue is consumers’ rising interest in alternative diversions, including streaming digital video, video games, mobile devices and apps, and Internet offerings like YouTube.”

Average monthly U.S. consumer spending on physical video rental and purchasing dropped to $8.95 in 2013, down from $9.87 in 2012. Overall, however, U.S. consumers spent more on transactional home entertainment, including video on demand combined with electronic purchase, rental and subscription via the Internet. Transactional spending increased to $13.94 per month in 2013, up from $13.88 in 2012.

Total sales of discs fell to $7.5 billion, down 9 percent from $8.2 billion in 2012. The mature DVD segment suffered a 13.6 percent decline in revenue in 2013. Meanwhile, Blu-ray managed only a meager 2.6 percent expansion. While unit sales grew by 4.2 percent to reach 124 million, rapidly falling prices made for a weak revenue increase.

U.S. rental spending in 2013 slipped by 9 percent, falling to $4.3 billion, down from $4.7 billion in 2012. The drop was partly driven by rental-store closures and the loss of disc subscriptions at rental leader Netflix.

Rental spending at kiosks, which had grown strongly during the previous several years, expanded only 1.2 percent in 2013, as Redbox slowed expansion and focused on absorbing its NCR acquisition while also optimizing existing locations and customer behavior.

The physical-product share of the home entertainment market dropped to 64 percent of spending in 2013, down from 96 percent in 2004. Along with the rise of alternative forms of entertainment, the U.S. physical home video market is being impacted by other factors.

“During the heyday of DVD, the widespread availability of cheap discs allowed most consumers to build enormous video libraries,” Arrington noted. “Now consumers have become more discriminating in their purchases. And with the rise of iTunes and other online sources, it’s pretty much an equal choice for buyers whether they want to purchase a video title on disc, or download it from the Internet. Under these circumstances, an increasing number of consumers are choosing the download option.

A decade of decline?

“Unless Blu-ray Disc prices stabilize and box-office performance stays high, as it might with sequels to ‘The Avengers’ and ‘The Hunger Games’ on the table, another year of Blu-ray unit growth that is slight at best could yield a downward turn in spending for the format in 2014,” Arrington observed. “In any case, any reasonable amount of growth in Blu-ray is unlikely to prevent what will next year become a decade of decline for a once-thriving disc market.”