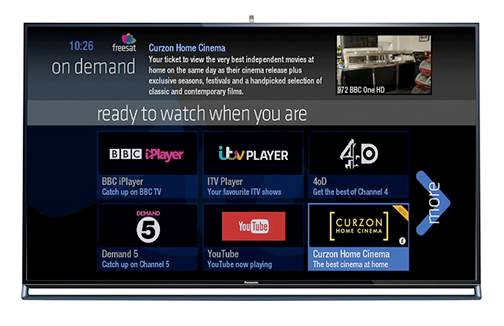 The new player, created by Curzon Home Cinema, gives Freetime viewers the opportunity to watch the latest cinema releases On Demand in the comfort of their own living room. However, unlike many other movie services, viewers only pay for the films they watch and are not charged an ongoing monthly subscription fee. Many films can be streamed for as little as £1.

Curzon Home Cinema offers the very best in independent cinema, including a hand-­‐picked selection of award-winning, critically-acclaimed films – made available, where possible, on the same day as their cinema release.

Emma Scott, Freesat’s Managing Director, commented: “We are excited to launch our first film On Demand player, which enables Freesat viewers to watch some of the best independent films available, often on the day they are released in the cinema.’ “Freesat already offers great choice with over 200 subscription free channels and the most popular On Demand players. And now Freesat’s Freetime viewers can enjoy a brilliant selection of films including both new releases and classics, yet they only pay for what they watch. The partnership demonstrates our commitment to our viewers to provide the best choice about how, what and when to watch great entertainment.”

The Curzon Home Cinema Player will join Freesat’s existing TV players, including BBC iPlayer, ITV Player, 4oD, Demand 5 and YouTube, plus BBC News and BBC Sport apps, and will be available on all Humax Freetime set top boxes from Wednesday 28th May and Panasonic Freetime smart TVs from next month.